No specialist to treat dengue in Muktsar 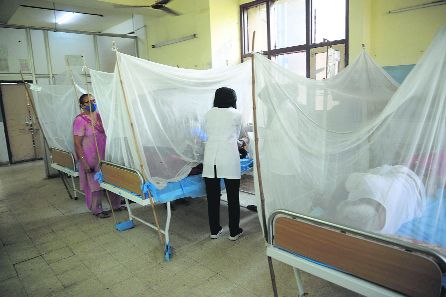 With 34 new cases being reported on Friday, the dengue count has reached 373 in the district

With the dengue count surging, 967 cases have been reported in the district till Thursday, but not even a single patient is admitted to any government medical facility. The reason is that there is no specialist (medicine) doctor in any government hospital.

On September 23, 328 dengue cases were reported in the district. This count has increased three-fold in a month, with the maximum cases being reported from urban areas. Of the 967 cases, 490 are from Malout urban, 229 Muktsar urban, 162 Gidderbaha urban, 28 Doda block, 21 Alamwala block, 19 Lambi block and 18 Chak Sherewala block. Of these, 534 cases were reported this month.

Muktsar CMO Dr Ranju Singla said, “There is a surge in dengue cases. We have set up special wards in civil hospitals, but we don’t have any specialist (medicine) doctor in the district. At present, not even a single dengue patient is admitted to any government hospital in the district. A girl in Malout died. Besides, two suspected dengue deaths have occurred.”

“An MD (Chest and TB) doctor posted at Badal village is handling the dengue cases in the district,” she said, adding: “We are taking steps to control the surge. Special teams have been formed for fogging operations, awareness drive and to destroy dengue larvae. Besides, we are doing free testing at civil hospitals in Malout and Muktsar.”

A dengue patient’s relative from Gidderbaha said, “Private doctors are fleecing the patients. I donated blood and Rs 12,000 to get one plasma unit. The state government is just doing lip service. There is hardly any check on illegal practices in the health sector.”