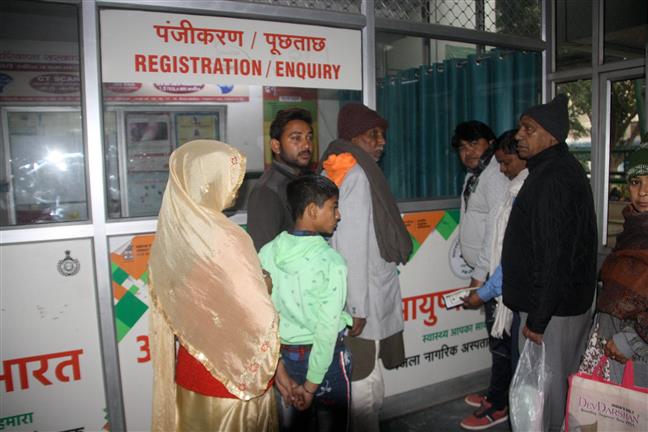 All the branches of the Indian Medical Association (IMA) have issued an advisory to its members to “put on hold the intake of new patients till the insurance company is holding your claim”.

IMA Bathinda branch president Dr Vikas Chhabra said, “All PMJAY empanelled hospitals are working hard with government to pass on the benefits of your ambitious PMJAY scheme to the poorest of the society who otherwise could not think of getting treated at quality private hospital, but it is a sorry state that all are disappointed the way insurance companies are implementing the scheme.”

He alleged that it was always a matter of concern that every insurance company tried to minimise the claim amount. “But since SBI General Insurance Co. has joined the scheme on August 20, 2021, the things have taken the turn for worse.”

Annoyed with problems being faced by empanelled hospitals, an emergency meeting of the IMA-Punjab was called on October 10 at Ludhiana. More than 300 doctors from all over Punjab, who have their hospitals empanelled under the scheme, along with IMA branch officials, attended it and submitted an authority letter for quitting the scheme en masse.

Later, they held a meeting with health minister OP Soni and principal health secretary Vikas Garg. Both listened to the grievances of the doctors and assured them of release of payments this week, but after they fail to get any claim by October 22, they took a decision to suspend Ayushman Bharat scheme in Punjab.

“Almost every hospital has so much pendency of claims that now it’s impossible for small and medium size hospitals to meet their day-to-day expenses in the form of salary/electricity bills and likewise,” he added.

Chhabra also stated, “We have sent emails to Prime Minister, Chief Minister of Punjab, Principal Health secretary, CEO State Health Agency Punjab and other officials requesting them to kindly take immediate steps to resolve problems and ask the officials to make payments of claims submitted up to October 7, 2021 as per guidelines of 15 days, by October 22, 2021.”

He claimed that as “our legal and genuine demands are not met and we have been exhausted off our finances we have stopped taking new patients and will resume taking new patients only after complete claim payments are received and other issues are resolved”.

Doctors alleged an insurance company and state government were responsible for the failure of the scheme in Punjab.