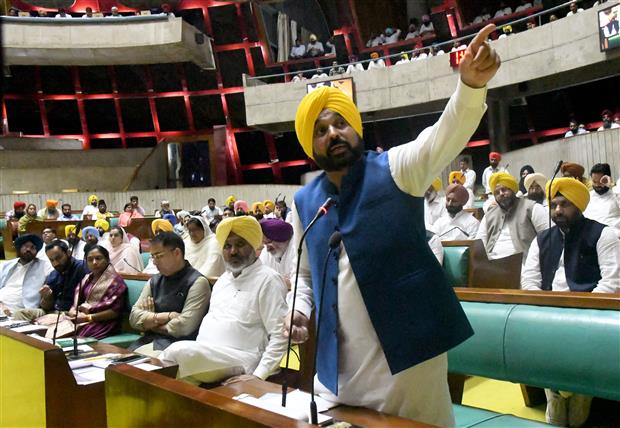 Chief Minister Bhagwant Mann today moved a confidence motion, saying he was bringing in the trust vote to seek the confidence of the Vidhan Sabha in his council of ministers. The voting on the motion of confidence will be held on Monday, the last day of the session.

AAP had recently claimed that at least 10 of its MLAs were approached by the BJP with an offer of Rs 25 crore each to topple the six-month-old government.

Mann hits out at Channi

CM Mann hit out at his predecessor Charanjit Channi, who has been missing from the political scene ever since the Congress debacle in the elections. “In his last days as the CM, Channi signed several files in violation of rules. Now, those files are being put before me, and I don’t know what to do with them. You (Congress) can perhaps help me by getting me in touch with him so that a ‘smooth handing over of the government’ can take place,” he said.

Amid three adjournments preceding the motion, and walkout by two BJP MLAs and 15 Congress legislators, the CM said he was moving the trust vote to show that 2.75 crore Punjabis had confidence in AAP.

“The objective of bringing the trust vote is to expose their (referring to the BJP) designs to bring down my government, as they have tried in other non-BJP-ruled states,” he said, adding AAP MLAs were not for sale.

The BJP MLAs walked out of the House before the motion was moved, in protest against their exclusion from the Business Advisory Committee meeting and the “refusal of the AAP to thank PM for renaming the Chandigarh airport after Shaheed Bhagat Singh”.

Assailing the Congress for creating ruckus in the Assembly called to discuss significant issues related to Punjab, the AAP on Tuesday said the main Opposition party was clearly working as the “B-team” of the BJP.

Addressing the media, Finance Minister Harpal Singh Cheema, along with ministers Inderbir Singh Nijjar and Harbhajan Singh ETO, said the Congress had no issue to raise against the government and that’s why it created mayhem in the Assembly even when the government gave it ample time to hold discussions on crucial issues.

He said AAP had foiled the agenda of the BJP to implement ‘Operation Lotus’. “Now, the Congress is working clandestinely with the BJP to topple the government,” he added. TNS

Earlier, Punjab Governor Banwarilal Purohit had withdrawn his assent to allow the Mann government to hold a special session against the “Operation Lotus” on September 22. When the government re-convened the session, the Governor had questioned it on the legislative business it intended to bring in the session.

The twists and turns in the run-up to the session notwithstanding, Mann’s attack on the BJP was not even half as sharp as his attack on the Congress. While he accused the BJP of rolling out “Operation Lotus” to either buy off or threaten AAP MLAs, he took a potshot at the Congress for being the “B team” of the BJP.

When the CM, who as the leader of the House, got up to speak on the confidence motion, the Congress MLAs opposed it, with Leader of Opposition Partap Singh Bajwa saying that they were not informed during the Business Advisory Committee meeting about the motion being moved today.

“You are challenging the power of the Governor,” he said.

The Congress MLAs stalled the functioning of the House for almost 40 minutes, saying the motion could not be brought in. As the pandemonium continued, the Speaker asked the Marshals to march out the MLAs. When they refused to go, the House was adjourned thrice. They finally walked out after being suspended for the day.

“Their (Congress MLAs) silence and identical letters by Bajwa and state BJP chief Ashwani Sharma to the Governor prove that they do not care about democratic values and are hand in glove with the BJP. Perhaps, this is the reason poll-bound Himachal and Gujarat do not feature in their ‘Bharat Jodo Yatra’,” said the CM.

As the Congress MLAs had walked out, Finance Minister Harpal Cheema urged Speaker Kultar Singh Sandhwan that the discussion on the motion be postponed to the next sitting. It was announced so subsequently.

The recitation of poems on the floor of the House is common, but trying to regale the MLAs in the midst of an adjournment is not. After the Speaker adjourned the House for 15 minutes, AAP legislator Mohammad Jamil ur Rahman was heard saying, “Hum to woh shayar hain jo waqt pade to talwar bhi utha lete hain.”

As the debate between the treasury and opposition benches raged, Leader of Opposition Partap Singh Bajwa and Agriculture Minister Kuldeep Singh Dhaliwal asked the media (sitting in the Press gallery above the Assembly hall) who was right on the question of convening the session.

As the government apprehended that it could face protest in the House, all those who entered the Vidhan Sabha were asked whether or not they were carrying a black cloth with them. Unlike in the past, the frisking of all media persons was thorough.