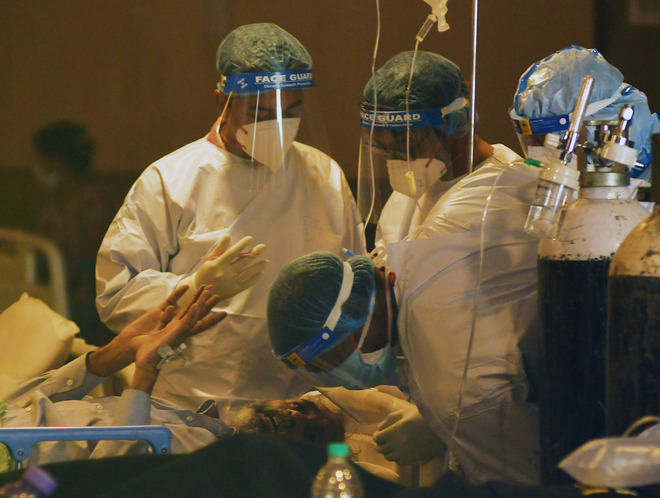 Doctors examine a patient at a Covid care centre. File

Covid survivors not following up with the doctor post recovery or continuing medicines after recovery on their own are the major factors leading to the black fungus infection (mucormycosis).

In addition to this, cases have surfaced where people are indulging in self-medication (to avoid hospital visits) and buying steroids on their own for tackling Covid, which is later leading to the black fungus infection.

Who are at risk

All recovered patients from Covid who are or were on steroids, if experiencing some headache, vision impairment, swelling on face, nasal block, altered mental state or blackish discolouration around the bridge of the nose should get themselves checked for black fungus.

Nearly three-four cases are being reported every week in major hospitals of Ludhiana though many have been cured. A few patients have lost their eyesight after contracting black fungus. It affects the nose, sinuses, eyes and brain.

Dr Manish Munjal, Head of Department of Otorhinolaryngology at Dayanand Medical College and Hospital (DMCH), said they had received 20-25 cases of black fungus during the second wave and most of the patients were Covid survivors.

“The problem is found mostly in Covid survivors who are diabetic, hypertensive or kidney patients. They are cured of the virus but during the process, they are given steroids. The body’s immune system goes into an overdrive to fight the virus. Drop in immunity later could be triggering these cases of mucormycosis,” said Dr Munjal.

He said patients needed to do a regular follow-up with the doctor after recovery. “Telemedicine is not a popular concept in Punjab, especially in rural areas, due to which patients continue to take medicines post recovery on their own which leads to complications like the black fungus,” Dr Munjal added.

Christian Medical College and Hospital is also receiving cases of black fungus. During pre-Covid times, one case was reported in a month but now, the hospital is getting two-three cases every week.

Dr Priyanka, associate professor in Department of Ophthalmology at DMCH, said they received three patients in the past few days. One is still admitted and has lost sight in one eye.

Dr Shaffie Baidwal, associate consultant, Department of Ophthalmology, Fortis Hospital, said when the fungus invades the para-nasal sinus mucosa, it may spread directly to the orbits, and from there to the brain. With extensive spread of the disease, removal of orbit/eye along with sinuses may be necessary. Often it is too late to save the patient’s vision, or even their eye or life.