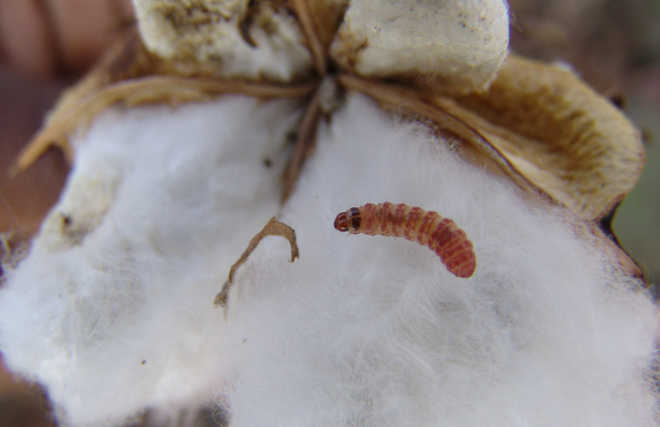 To counter pink bollworm infestation on cotton crop in the coming seasons, a high-level meeting of agricultural experts and agri-scientists from three states, which were affected with the pest attack this season, was held under the aegis of the Interstate Consultative and Monitoring Committee here.

Apart from other requisite measures, the experts primarily laid focus on “off season” management of pink bollworm. The meeting was organised to assess the status of pink bollworm on cotton and to review the plan of action for its management.

Dr Gurvinder Singh, Director of Agriculture and Farmers’ Welfare, Punjab, said the state department of agriculture and PAU needed to be more vigilant at pink bollworm-infested areas in Bathinda, Mansa, Muktsar and Fazilka districts during the off season.

“Regular surveillance and training camps for the pest management are a must. Strategies need to be chalked out to manage pink bollworm in an effective manner,” said Dr Gurvinder.

The director said: “The decisions taken during the meeting include constituting district, block and village-level teams by the Chief Agriculture Officers of the respective districts and surveillance should be done twice a week. Timely availability of canal water for sowing of cotton, preparation of informatory literature on pink bollworm management, complete destruction of leftover cotton sticks in February-March, online meeting with ginning factories and oil extraction mills will be organised during the first fortnight of January, covering of seed cotton stocks lying in the ginning-cum-oil extraction mills with polythene sheets and fumigation of the same at regular interval, providing the list of the recommended Bt cotton hybrids at the earliest. The state government will be approached to exempt officers of the cotton belt from being put on election and other duties.”

Dr Pakhar Singh, Bathinda Chief Agriculture Officer, discussed the status of cotton arrival in Bathinda. He said pink bollworm attacks remained significantly higher in Bathinda and Talwandi Sabo blocks of the district. He also said district and block-level teams were constituted for organising training camps for off season management of the pest.

Dr SK Verma, Sirsa CICR Regional Station head, said: “Pink bollworm infestation was more in Punjab and Haryana in comparison to Rajasthan. Timely action to contain the infestation is the key to keep it at bay.”