On Bikram Majithia's release from jail before Rakhi, his sister Harsimrat gets emotional; says will infuse a new life into SAD : The Tribune India

She said case against Bikram was registered with mala fide intention 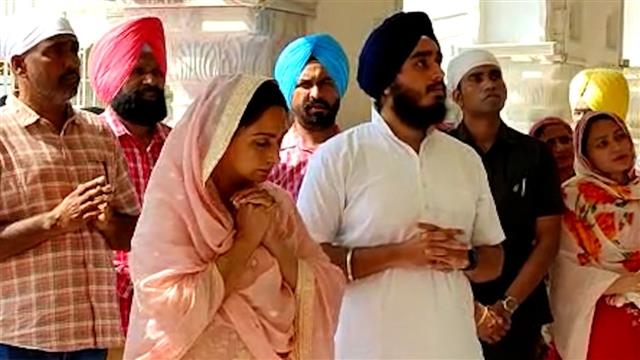 She was here to pay obeisance at the Golden Temple this morning when former cabinet minister Bikram Majithia was granted bail by the Punjab and Haryana High Court in a case registered under the Narcotic Drugs and Psychotropic Substances (NDPS) Act in December 2021 during Charanjit Singh Channi-led Congress government.

Seemingly emotional, the former union minister said she was preparing to go to Patiala to tie ‘rakhri’ to her brother after performing ardas at the Golden Temple. “Ten minutes ago, I was praying before the Almighty, if this sister would have to tie the ‘rakhri’ to her innocent brother in jail this year. I am overwhelmed to know about the regular bail approval of my brother. “Akal Purakh da koti koti shukrana kardi hain" (I wholeheartedly thank the Almighty),” she said.

She said the case against Bikram was registered with malafide intention by the then government misusing its power yet she believed that he would come out clean of all the charges soon and would be an asset to strengthen the SAD.

“I question those parties who played politics by implicating Bikram under frivolous drug charges and put him behind bars for the past over six months. Could drug menace be curbed in the state during this span? Rather, it prospered. I appeal to the government to shun vendetta politics and save those who were losing their lives due to drugs,” she said.

On the rebel voices emerging within the party, she said the Centre and its agencies could never let the regional parties prosper. “The Centre intends to create division among the regional party members with an aim to take the reins in their hands. Their target was not only the SAD, but the SGPC too. Earlier, Congress played a dubious role in bifurcating the SGPC into a separate Haryana Sikh body, followed by the BJP doing the same by splintering the Delhi Sikh body. They want to rule the ‘Sikhs’ without realising that Sikh could be ruled by the ‘Gurus’ only,” she said.

She stated that since 2015, the Congress and AAP, both targeted the SAD and misguided people in the name of ‘badlav’.

“AAP’s penetration in Punjab was aimed at weakening the mainstream regional party (SAD) in the first place and transferring the Congress’ vote to its kitty,” she said.

On unsuccessful attempts of premature release of Sikh political prisoners, she criticised the Centre while mentioning that if the killers of Rajiv Gandhi could be released where was the problem in releasing the Sikh prisoners.