Sanyukt Kisan Morcha, an umbrella body of around 40 protesting farmer unions, holds meeting to discuss next course of action

Agitating farmers on Wednesday burnt copies of the contentious farm laws to mark the festival of Lohri.

One lakh copies of the three agri laws were burnt at the Singhu border alone, said Paramjeet Singh of Samyukta Kisan Morcha.

Lohri is widely celebrated in Punjab and Haryana to mark the harvesting of Rabi crops. People traditionally celebrate it by circling around bonfires, throwing food items—peanuts, puffed rice, popcorn etc—into the fire, singing folk songs, dancing and feasting on the festive food.

“The celebrations can wait. We will celebrate all these festivals the day our demand of repealing of these black laws are met by the Centre,” said 65-year-old Gurpreet Singh Sandhu who hails from Haryana’s Karnal district.

Several bonfires were lined up at the Delhi-Haryana border stretch, the nerve centre of the farmers’ agitation. The protesting farmers raised slogans, sang songs of resistance and hope as they orbited the bonfire, burning copies of farm laws and praying for the success of their protest.

“This Lohri is filled with struggle,” said Rajbir Singh, a 34-year-old farmer from Punjab’s Barnala district.

“It is minus the fun, the song and the dance we used to have back home on Lohri. But I am happy to be here and celebrate it with my family of farmers this time.”

“Today, we have burned the copies, tomorrow the Centre will burn them. They have to, we will make them do it,” he added.

Many farmer leaders, including Yogendra Yadav, Gurnam Singh Chaduni, also threw copies of the farm laws in the bonfire, created on the premises of the Kisan Andolan office. 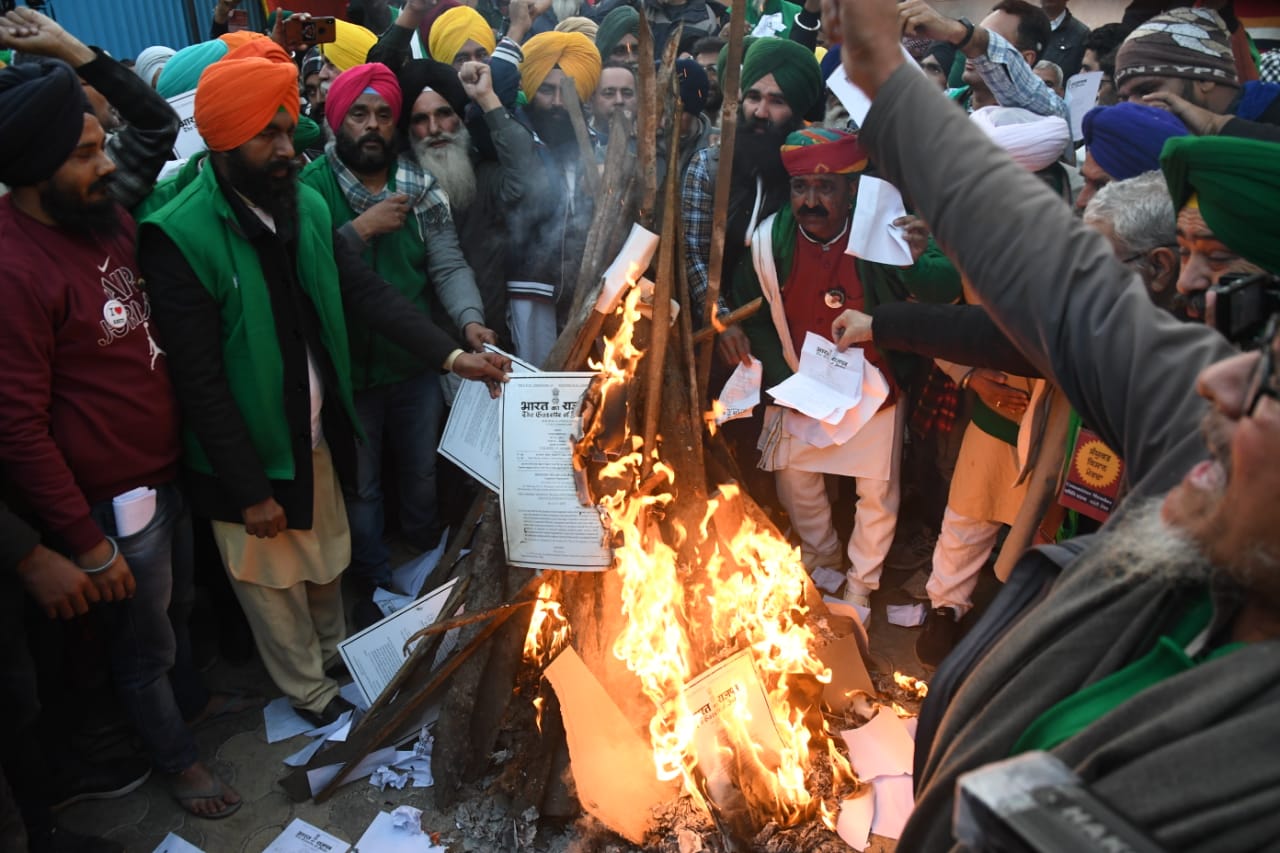 Earlier in the day, farmer leader Manjeet Singh Rai said they would celebrate Lohri by burning the copies of farm laws at all protest sites in the evening.

Meanwhile, the Sanyukt Kisan Morcha, an umbrella body of around 40 protesting farmer unions, is hold a meeting to discuss the next course of action.

This comes a day after the protesting farmer unions asserted that they would not appear before the Supreme Court-appointed panel, alleging it was "pro-government", and said they would not settle for anything less than the repeal of the three contentious laws. 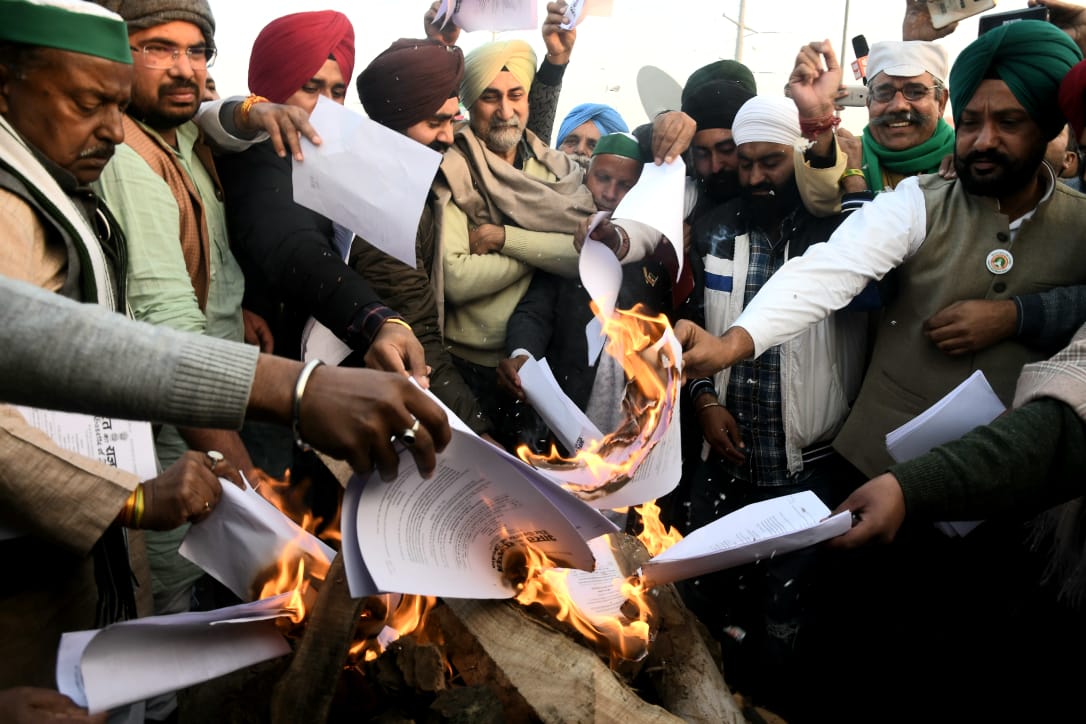 The unions also raised doubts over the neutrality of the members of the committee even as they welcomed the top court's order to stay the implementation of the laws.

The Supreme Court on Tuesday stayed the implementation of the controversial farm laws till further orders and set up the four-member committee to resolve the impasse between the Centre and the farmer unions protesting at Delhi's borders over the legislations.

Thousands of farmers, mostly from Haryana and Punjab, have been protesting at several border points of Delhi since November 28 last year, demanding a repeal of the three laws and a legal guarantee to the minimum support price (MSP) system for their crops. 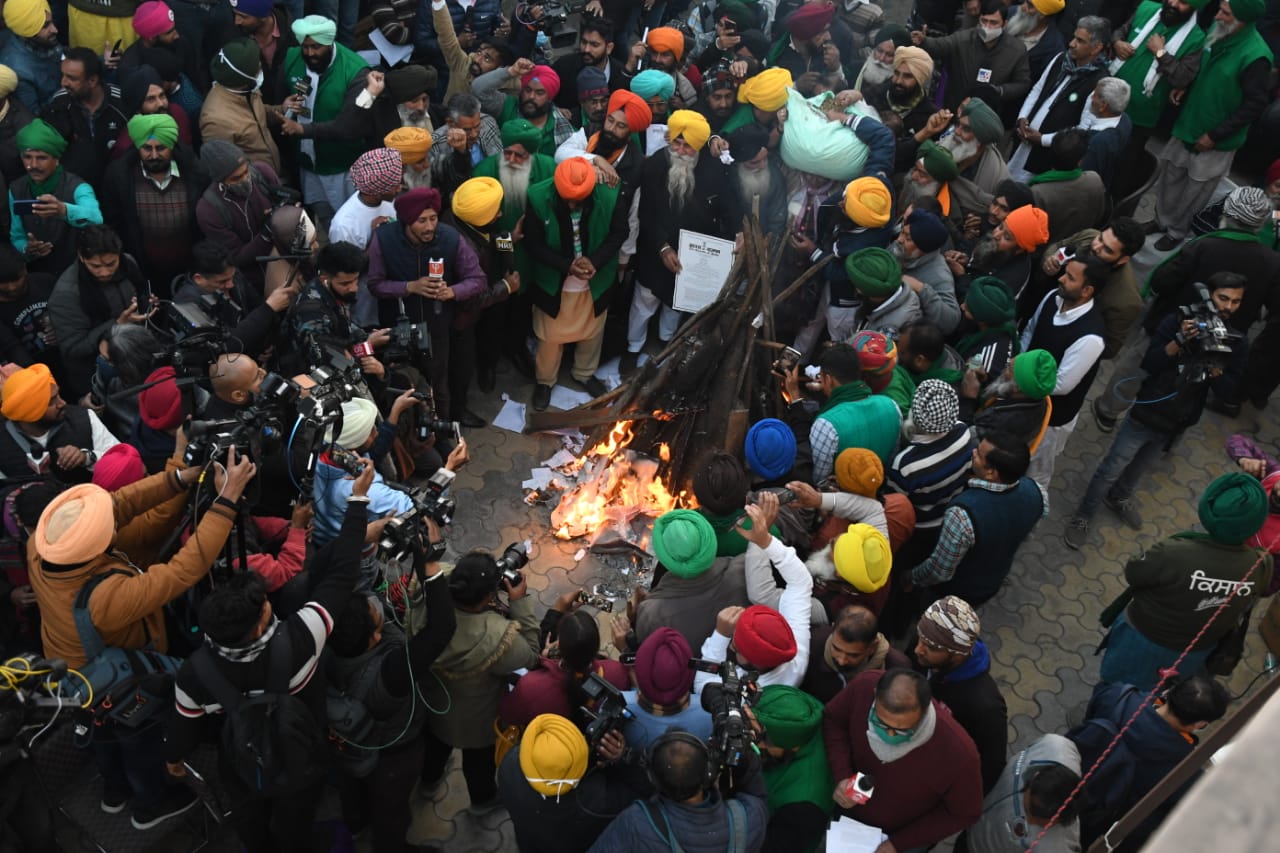 However, the protesting farmers have expressed the apprehension that the new laws would pave the way for eliminating the safety cushion of the MSP and do away with the "mandi" (wholesale market) system, leaving them at the mercy of big corporates. — PTI