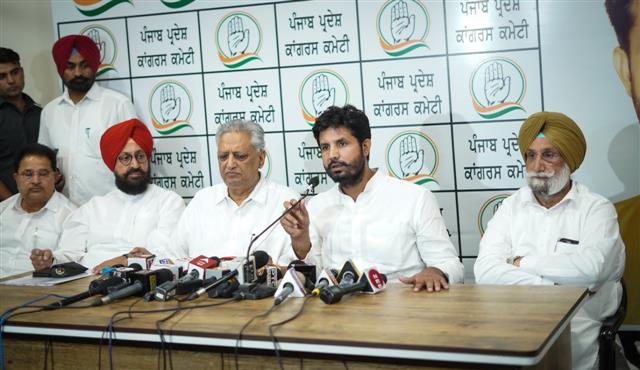 Congress leaders at a press meet in Chandigarh on Wednesday.

A day after Mining Minister Harjot Bains marked a probe into the alleged illegal mining activities of former Assembly Speaker Rana KP Singh, the latter sought an investigation by the CBI or a High Court judge.

“Bains’ locus standi to mark a Vigilance probe against me when the Punjab and Haryana High Court is already looking into illegal mining along the International Border. The credentials of Bains are questionable,” he told the media here today.

Bains had yesterday written to the Vigilance Bureau to investigate Rana’s role in illegal mining, alleging that the Congress leader had misused his position during the Congress government.

The AAP has accused the Congress of shielding its leaders, who, the ruling party claimed, had looted Punjab for decades instead of working for the welfare of the common man.