Our fight is against Centre, says Sukhbir Badal 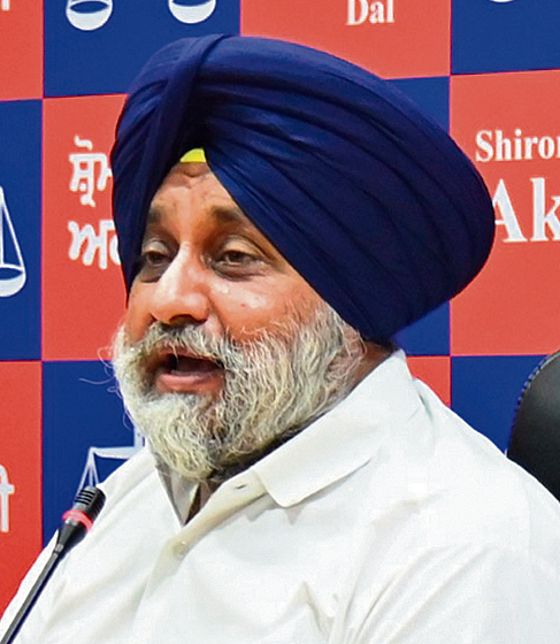 Shiromani Akali Dal (SAD) president Sukhbir Singh Badal today said “we want people of Punjab, particularly farmers, to understand that our fight is with the Centre and not among ourselves”.

Talking to The Tribune, the SAD president said: “Standing together will make us stronger. Don’t forget we have been the biggest voice of the farmers in the country since pre-Independence days. Public display of differences suited the intentions of the Centre to keep the issue diluted. In the process, the voice against agriculture laws is diluted.”

He was speaking on why the party had to suspend its 100-day ‘Gal Punjab Di’ programme on September 3, a day after protesting farmers faced water cannons and lathicharge in Moga, where the SAD president addressed a public meeting.

Public display of differences suited the intentions of the Centre to keep the issue diluted. In the process, the voice against farm laws is diluted. —Sukhbir Singh Badal, SAD Chief

“Farmers need to understand the Centre’s deep-rooted conspiracy against the Punjabis. We need to sit together and fight together,” said Sukhbir.

The SAD president’s outreach programme had been facing farmers’ opposition at a number of places since it kicked off on August 18.

On the second day, farmers associated with the BKU (Dakaunda) cornered him at Guru Har Sahai in Ferozepur. When his programme faced protests at Sahnewal in Ludhiana district on August 31, Badal named Congress and Aam Aadmi Party leaders accusing them of sponsoring the protests.

The party is resuming the programme from September 11 from Amloh. A three-member committee, comprising Balwinder Singh Bhunder, Prem Singh Chandumajra and Manjinder Singh Sirsa, is talking to protesting farmers to compile a report on their demands.

Commenting on the C-Voter survey report, in the context of the forthcoming Assembly elections, which puts the SAD at the third position, Sukhbir said: “The survey is only an extended arm of the AAP. Last time they had given AAP 95 seats. The party had to settle for just 20. This time they are being given 57 so you can imagine the final result. AAP will be nowhere in the reckoning and the results will show what the people want.”