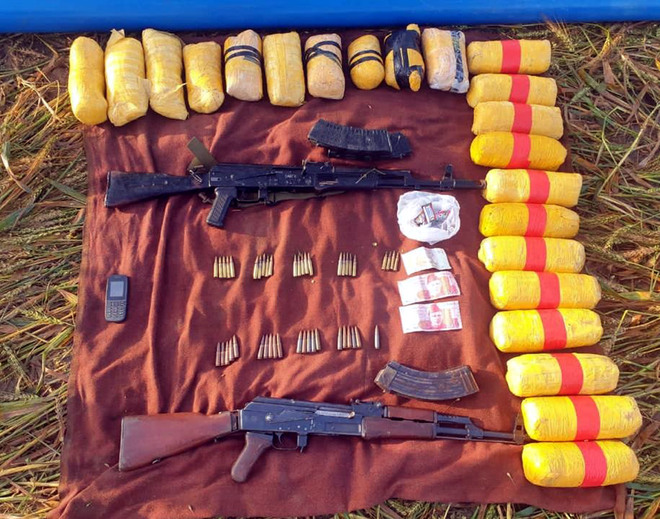 The consignment of drugs and ammunition seized in Amritsar.

The Amritsar (Rural) police in coordination with the BSF gunned down a Pakistani smuggler during the wee hours near the India-Pakistan border on Wednesday. However, no arrest could be made.

In a joint operation, 22 packets of heroin, weighing approximately 22.6 kg, two AK-47 rifles with two magazines and 21 live rounds, one SAIGA-MK rifle with two magazines and 21 live rounds, along with a mobile phone with two Pak SIM cards, a 15-foot plastic pipe having diametre of 4 inches (made in Pakistan) and Rs 210 in Pakistani currency were recovered from border outpost (BoP) Kakkar falling under the Lopoke police’s jurisdiction. Acting on a tip-off, Amritsar (Rural) SSP Dhruv Dahiya led a team comprising DSP (detective) Gurinderpal Singh Nagra and ASP, Majitha, Abhimanyu Rana, which coordinated with the BSF to carry out the operation successfully. Indian smugglers who were supposed to receive the consignment have been identified to be linked with Jagdish Bhura and Jaspal Singh of Gatti Rajoke village in Gurdaspur. The two have been in touch with Pakistan’s Inter-Services Intelligence (ISI). The SSP said the links of Pakistani smuggler on this side were being investigated to ascertain details.

A follow-up action is being taken to unearth the entire network of border couriers and associates of Jagdish Bhura. Our aim is to arrest the accused that would lead us to further vital disclosures. — Dinkar Gupta, DGP

“Bhura, who is in Belgium, has been involved in terror activities, while Jaspal has been involved with Pakistani smugglers in pushing weapons into India. A case under the NDPS Act was registered against him at the Ferozepur police station in July, 2020,” he said.