Medical Superintendent of another hospital given additional charge 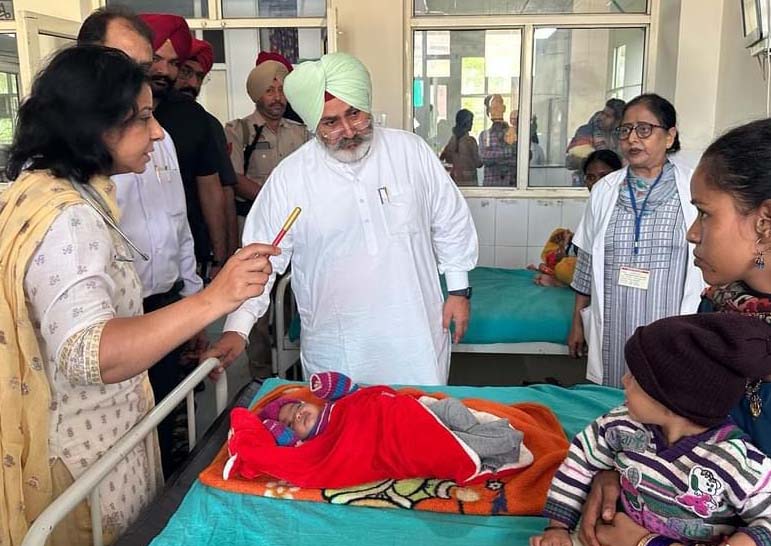 Chetan Singh Jouramajra at a government hospital in Patiala. File

While the state Health Minister is busy touring the state, his home district is without a regular Civil Surgeon. The district has seen four civil surgeons in six months.

Even at present, the Civil Surgeon holds the charge ‘additionally’, leading to pendency and delay in the execution of key projects.

The Civil Surgeon office is running smoothly. We will take a decision on appointing a regular Civil Surgeon soon and appoint somebody only on merit. For now, we have given charge to an SMO. Pending files and cases will also be cleared soon. —Chetan Singh Jouramajra, Health Minister

I am trying to juggle between two offices. Touring the district to oversee the AAP mohalla clinics is a priority. The pendency will be cleared only when a regular appointment is made. —Dr Sandeep Kaur, Medical Supdt, Mata kaushalya hospital

Following the delay in appointing a Civil Surgeon, pendency at the Civil Surgeon office has gone. Many Central and state government projects are suffering. —A medical officer

Three days ago, the Medical Superintendent at Mata Kaushalya Hospital, Dr Sandeep Kaur, was given the additional charge as Patiala’s Civil Surgeon as the Health Department could not shortlist a candidate for appointment as a regular Civil Surgeon.

Sources said following the delay in appointing a civil surgeon, pendency at the Patiala Civil Surgeon office has gone up and many key projects and files are pending for a decision.

“Many Central and state government projects are suffering. The issue of replenishing medicine stocks at the health centres is also getting delayed,” said a medical officer.

Experts said owing to the mismanagement at the hands of the Health Department in appointing a regular Civil Surgeon, the rural health centres are suffering, with many such centres without specialists.

“In many cases, specialists and medical officers have managed district posting through “contacts”, leading to dismal situation in villages. There is already a shortage of doctors and on top of it, they rarely visit the health centres. With no regular Civil Surgeon, rural health centres are suffering,” they said.

“Private X-ray clinics and labs, and our drive against drug de-addiction is also suffering along with checks against sampling of adulterated food,” said an insider.

Meanwhile, government employees and pensioners alleged that hundreds of reimbursement medical bills were pending and following the absence of a regular Civil Surgeon, the lower rung clerical staff was dealing with such cases as per their whims and fancies.

“I am trying to juggle between two offices, with some senior officials helping me. Touring the district to oversee the AAP mohalla clinics is a priority. The pendency in the Civil Surgeon office will be cleared only when a regular appointment is made,” said Dr Sandeep Kaur.

Health Minister Chetan Singh Jouramajra said the Civil Surgeon office was running smoothly and they would soon take a decision on appointing a regular Civil Surgeon. “We are not like other political parties who appointed out-of-turn officers as civil surgeons. We will appoint them only on merit. We have given charge to an SMO. Pending files and cases will be cleared soon,” he said.