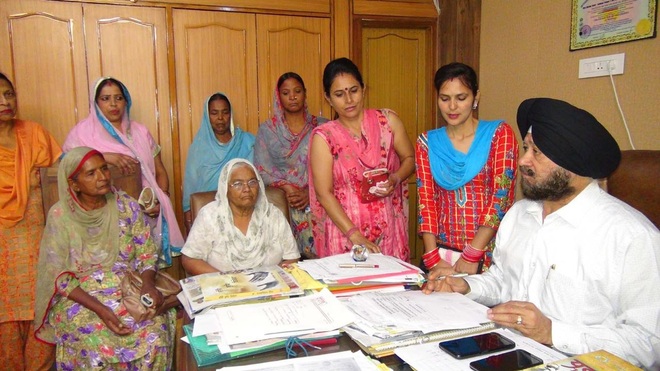 Kin of the accused with philanthropist Surinder Pal Singh Oberoi.

Of the 14 youths, 11 are from Punjab, one from Haryana and two from Pakistan. Nine out of the 11 boys landed in Chennai last night by an Emirates flight and were immediately quarantined at the military hospital. Another will be arriving in the next few days. The other two have flown to Pakistan from Dubai.

The boys were convicted of murdering two of their Punjabi colleagues, Asif Ali of Jalandhar and Varinder Pal Singh of Kapurthala on December 31, 2015, following a fight over controlling territories in the illicit bootlegging business in Sharjah.

Oberoi reportedly paid Rs 67 lakh as blood money to the families of the deceased. Earlier in 2010, Oberoi had paid a whopping 1.4 million US dollars to rescue 17 Punjabi youths, who were convicted of murder of a Pakistani youth and were facing the gallows in the UAE.

“In the present case, the boys had done to death two of their ‘business associates’. All of them were into the bootlegging business. The UAE police arrested them a day later. I attended 26 hearings in Sharjah, where the trial was on and a compromise was reached between the accused and the family of the deceased on 24 October, 2018. The compromise can be done only after one pays blood money. In this case I paid Rs 67 lakh,” he said.

The youths were identified as Tony Masih, Hardeep Singh, Navneet Kumar, Rohit and Happy, all of Gurdaspur; Harpreet Singh and Ajay Kumar of Nawashahr; Gian Chand of Hoshiarpu; Kulwinder Singh and Buta Singh of Kapurthala; Paramjit Singh of Jalandhar; and Dilbagh Singh of Haryana.