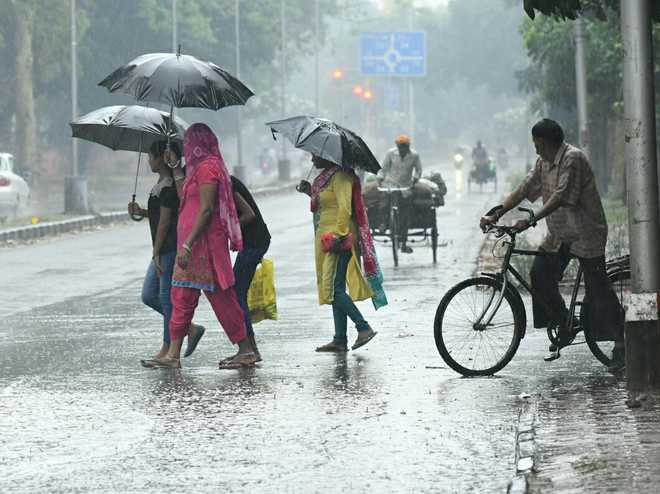 On the eve of the southwestern monsoon covering the entire country, rains during the month have been good in the states of Punjab and Haryana, but deficient in Himachal Pradesh.

In Punjab, the pre-monsoon rain from June 1 to June 26 were 24 per cent above the long period average for this period, while in Haryana the surplus was 15 per cent.

On the other hand, rain in June so far was deficient by 21 per cent in the hill state of Himachal Pradesh.

According to data released by the India Meteorological Department (IMD), Punjab received 47.8 mm rains from June 1 to June 26 as compared to the long period average of 38.6 per cent for this period.

During the past 24 hours, there has been fairly widespread rainfall activity over west Rajasthan and adjoining Punjab and Haryana in association with the cyclonic circulation at lower tropospheric levels over northeast Rajasthan.

The monsoon today advanced into the remaining parts of Rajasthan, Haryana and Punjab, thus covering the entire country, around 12 days in advance.

The normal date for this is July 8. The last time the monsoon advanced so early was in 2013 when it covered the entire country by June 16.

IMD data shows that during June, Una was the only district in Himachal to have received above normal rainfall.

The tribal areas in upper parts of the state have been hard hit, with the deficiency being 54 per cent in Lahaul and Spiti, 39 per cent in Kinnaur and 21 per cent in Chamba. Bilaspur and Hamirpur in the central part of the state also remained relatively dry with the shortfall being 46 per cent and 34 per cent, respectively.

On the other hand a few districts received heavy rains, with the surplus being 153 per cent in Rewari, 130 per cent in Karnal and 117 per cent in Kurukshetra and Kaithal.

Barring south-western parts, most areas of Punjab received surplus rain in June. The deficiency recorded was 55 per cent in Faridkot, followed by 47 per cent in Ferozepur and 46 per cent in Mansa. Tarn Taran, Muktsar, Patiala and Barnala were other districts where the shortfall ranged between 10 to 35 per cent.