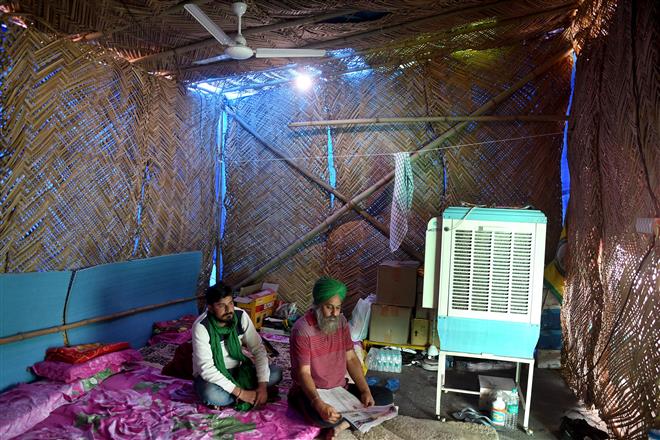 Farmers are gearing up for summer with fans and coolers at the Ghazipur border in New Delhi. Tribune photo/ Manas Ranjan Bhui

With the temperature soaring to mid-30 degrees on most days, the protesting farmers are busy shoring up their tents to fight the heat at the Ghazipur border.

Chic mats, fans, coolers, fridge, dried long grass and mosquito nets have all begun to show up at the protest site.

The first of the tents to fight the searing heat is the one being run under the aegis of Brahm Gyani Sant Baba Ajit Singh Hansali Saheb.

The tent is adjacent to Babaji’s langar and houses eight residents. While the inner walls are lined with chic mats, fans and coolers have already been installed.

“These things had to be done because it is getting hot,” said Manjinder Singh Bittu, who is from Mohali.

“We have sourced most things on our own. You can see these fans are new and we got the coolers as well,” he added.

Similarly, a self-help group is upgrading tents near the stage. The plastic sheets are being replaced with new ones that reduce heat inside the tents.

The height of the sheets is also being increased to hang fans.

“These sheets are made from khajur leaves. It keeps the temperature down. We are also increasing the height so that we can hang fans from above,” said Atmajeet Singh, a member of the self-help group.

“We are also adding mosquito nets on the sides. It will keep the mosquitos out and will help in cross ventilation as well,” he added.

There are also plans to install big water coolers that will be placed every 100 meters.