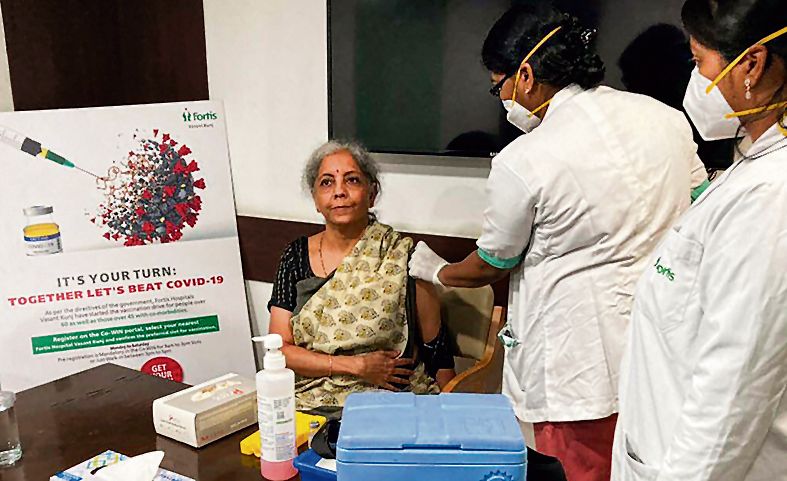 Nirmala Sitharaman, Finance Minister, gets a shot in Delhi. PTI

Maharashtra reported the highest daily new cases at 9,855. This is the highest number recorded in the state since October 19, when 10,259 new cases were reported. Kerala saw 2,765 new cases and Punjab 1,074.

The active caseload surged to 1,73,413 after an addition of 17,407 cases over the past 24 hours. “Maharashtra, Gujarat, Punjab and Madhya Pradesh are showing a rise in active cases. On the other hand, Kerala, UP, Jharkhand, Bihar and Assam have shown a reduction,” the ministry said. Punjab saw the second highest daily rise in active cases (395) after Maharashtra (3,254).

The number of people with new virus strain from the UK, South Africa and Brazil rose to 242 today, amid concerns of further rise in mutation cases. Stressing speedy vaccination, the Health Ministry said India-made Covaxin had shown effectiveness against the new variants. 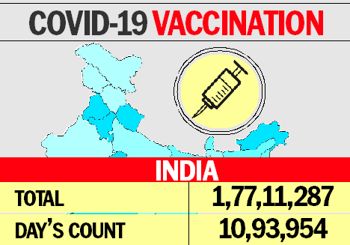 Give priority to elderly in pvt hospitals, says SC

At least 76 students and 10 teachers of eight government and private schools tested positive for the virus in Jalandhar on Thursday.