Punjab adds another chapter in its long tradition of peasant struggles

Despite split after split in organisations, state repression, agrarian crisis and a wave of suicides, struggle was one thing the farmers of Punjab never forgot in the past more than 100 years 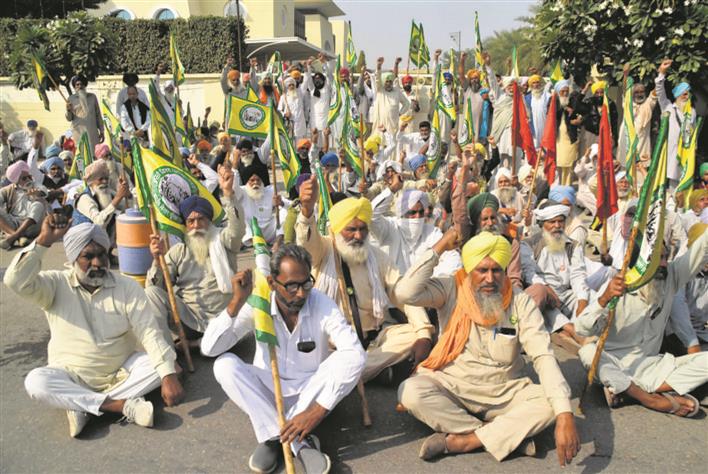 Last year, a young farmer leader at the Tikri border motivated the farmers saying “we have to continue the struggle so that we don't forget how to fight”, citing the folktale of a farmer who refused to stop tilling the land despite there being famine for 12 long years.

Despite split after split in organisations, state repression, agrarian crisis and a wave of suicides, struggle was one thing the farmers of Punjab never forgot in the past more than 100 years.

Continuing the tradition, the current farmers’ movement has added another glorious chapter to the long history of Punjab’s peasant struggles during the colonial rule and independent India.

Mridula Mukherjee, a historian known for her seminal work on Punjab's peasant movements, recounts in her book, 'Peasants in India's Non-Violent Revolution', how "the agitation of 1907 demonstrated to the government the potential of agrarian grievances becoming major issues".

The colonial government ultimately had to repeal the three laws.

Even after the British left, farmer movements continued. "Punjab has seen several rounds of mass mobilisation of farmers in the post-Independence era. Each round had its own distinct characteristics and issues of struggle. Mass mobilisations of farmers have always been in response to specific issues and have left a distinct mark on rural society," says economist Sucha Singh Gill.

The first major struggle after Independence was PEPSU tenants' struggle in Bathinda, Sangrur and Patiala led by Lal Party from 1948-52. This struggle for land to the tiller ended with the landless becoming the landowners in 1952. It was followed by Anti-Better Levy struggle launched by the Communist Party of India during Partap Singh Kairon's government, against tax imposed on farmers for using the irrigation water flowing from the Bhakra Nangal dam.

Later, an agitation for higher procurement prices for wheat and paddy led by Bharti Kisan Union was led mainly by rich peasants. This struggle from 1978-84 made several old organisations irrelevant.

But the current struggle, Gill says, was much different from the past ones. "Earlier, struggles were largely for sectional demands. This has pushed boundaries in every aspect, like expanding out of Punjab, the way it had every section of society, like women leading the movement, writers helping with their writings, intellectuals doing the research, and labourers standing in solidarity. With this struggle they have truly reclaimed the lost republic," he says.

Rajinder Singh, a young farmer leader, sees continuity in all these struggles. “In 1907, the colonial rulers were forced to repeal the three laws. Now the current dispensation had to do so,” he says.