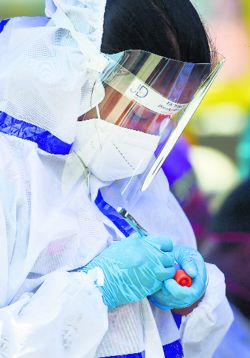 To check the surge in Covid cases in Punjab, Chief Minister Capt Amarinder Singh on Wednesday ordered a total ban on political gatherings and extended the night curfew from 9 pm to 5 am in all districts of the state.

To check the surge in Covid cases in Punjab, Chief Minister Capt Amarinder Singh on Wednesday ordered a total ban on political gatherings and extended the night curfew from 9 pm to 5 am in all districts of the state. The restrictions will remain effective till April 30. Violators, be it political leaders, will be booked under the Disaster Management Act and Epidemic Diseases Act, he stressed.

As part of the fresh curbs, the maximum gathering at funerals and weddings has been reduced to 50 people indoors and 100 outdoors. Schools and regular colleges, except for medical and nursing institutes, will also remain closed till April 30. Wearing masks has been made mandatory for all government employees while in office.

However, as some respite for shop owners in malls, the government allowed the entry of 10 people per shop at any given time. The earlier order had capped the mall entry to 100.

Capt Amarinder said it was a matter of concern that over 85 per cent of the cases in Punjab had the UK strain, which is more contagious and virulent. The state had no option but to go in for stricter measures to control the surge, he said, adding that he had been forced to order a ban on political gatherings as his pleas to refrain from organising such events had been ignored.

Expressing concern over the high positivity (7.7% ) and mortality rates (2% last week ) in the state, Capt Amarinder directed the health department to increase the vaccination drive to target 2 lakh persons per day (currently 90,000 are being inoculated per day)

He said he would again urge the Centre to relax the age criteria for vaccination in areas showing weekly doubling of positivity rate.

Jabs at workplaces from April 11

To boost the ongoing inoculation drive that continues to battle hesitancy and wastage issues, the government is all set to launch workplace Covid vaccinations from April 11.

Giving thumbs down to the CM's order on ban on gatherings due to Covid surge, the BKU (Ekta-Ugrahan) is adamant on holding a kisan conference on Baisakhi at Talwandi Sabo. BKU’s Shingara Singh Mann said, “Instead of upgrading facilities, the govt is creating fear among people.”

Many inoculation centres in Maharashtra are being shut due to the shortage of vaccine, Health Minister Rajesh Tope said on Wednesday, adding the state now had 14 lakh doses which would last just three days. PTI

The Serum Institute of India has sought a grant of Rs 30 billion to ramp up monthly production of AstraZeneca’s vaccine (Covishield) to over 100 million doses by May-end. The current output is around 65-70 million doses a month. Reuters