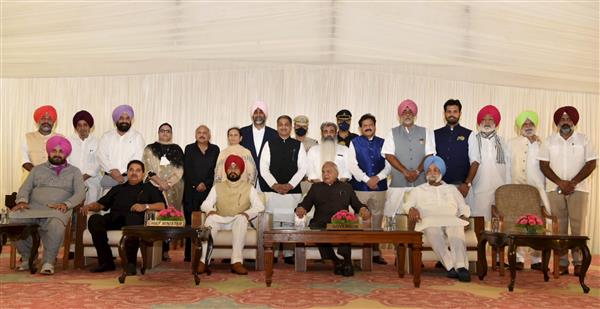 Unruffled, Nagra sought to clarify that he was never in the race, having resigned as MLA last year to mark his protest against the contentious farm laws.The Speaker has yet to accept his resignation.

Eleven former ministers in Capt Amarinder Singh government were re-inducted. Pradesh Congress chief Navjot Singh Sidhu was seen on the stage along with the new ministers. Capt Amarinder and former PCC chief Sunil Jakhar did not show up at the ceremony. Election on mind, CM Channi said decision-making would now be expedited. “I am working 24x7. I will fulfil all promises,” he added.

Brahm Mohindra, being the seniormost MLA, was administered the oath first. Next was Manpreet Badal. All re-inducted ministers were sworn in before the newcomers, with the exception of Kapurthala MLA Rana Gurjeet Singh. A former Irrigation Minister, he had to resign in 2018 after his name figured in a sand mining scam. Earlier in the day, MLAs from Doaba met Sidhu, demanding that Rana Gurjeet Singh’s name be dropped from the list. Despite that, the latter was taken in the Cabinet. So was Gurkirat Kotli. The Khanna MLA had faced trial for the abduction and molestation of French tourist Katia. He was acquitted in 1999 after the victim failed to testify against him and the other accused.

Punjab affairs in-charge and AICC general secretary Harish Rawat said, “No charges were proved against them.”

Hours before the swearing-in, ex-ministers Balbir Singh Sidhu and Gurpreet Singh Kangar told the media they were unhappy at being ‘dropped’ but would abide by the party decision.