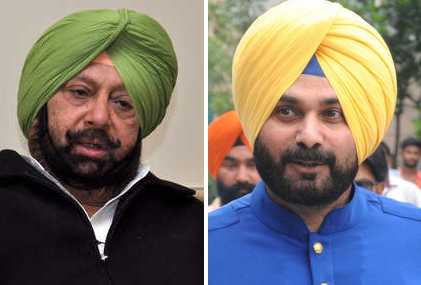 Punjab chief minister Amarinder Singh on Tuesday met the three-member Congress panel in Delhi amid escalating tension in the state unit with Navjot Singh Sidhu who has stepped up his attack against the chief minister.

Mallikarjun Kharge, who heads the panel, said after the meeting, "Everybody has said that they will fight the polls together and the party is united under the leadership of Sonia Gandhi and Rahul Gandhi" While sources say the panel discussed the political situation of the state and also issues related to Sidhu and possible way out to resolve the issue. The panel has got a larger mandate for poll preparation apart from resolving factionalism in the state party unit.

While Sidhu is not relenting in his attack on the chief minister, he has insisted on an early resolution of issues. While state in-charge Harish Rawat has said that the matter is with Sonia Gandhi and refused to comment on statements made by Sidhu.

The panel is headed by leader of opposition in Rajya Sabha Mallikarjun Kharge, and Harish Rawat and JP Aggarwal are its members. The Congress panel has been authorised to resolve the issue without alienating any of the factions in the state. It submitted its report to party interim president Sonia Gandhi on June 10.

Sources said the panel has not recommended the removal of the chief minister and Amarinder Singh is likely to lead the party in the next elections. Instead, a slew of reforms have been suggested in the party's state unit.

While the fate of Navjot Singh Sidhu is still not clear, sources said the panel wants his rehabilitation in the Punjab cabinet. Amarinder Singh is averse to Sidhu being elevated to the post of deputy CM but is ready to accommodate him in the cabinet, sources said.

The panel had met all the stakeholders in the party including chief minister Amarinder Singh and Navjot Singh Sidhu.