Punjab CM: Siswan to be developed as world-class tourist destination

The Chief Minister, who also launched the logo of Siswan Community Reserve, said Siswan would be developed as a world-class tourist destination. He said keeping in mind the immense tourism potential of the area, various initiatives had been taken up in the area. Primarily, visitor amenities like nature interpretation centre, thematic gates and signage, food court, washroom facilities, nature trails and jungle safari would be provided. The conservation issues like introduction of spotted deer, wild hares and other species, which once thrived in the area but have reduced in numbers through the years, were also being addressed, he added.

Capt Amarinder Singh said the development of tourist-friendly infrastructure and amenities coupled with promotional activities would lead to an increase in footfall, which would subsequently benefit the local community by way of additional job creation and various income-generating activities. He also appreciated the successful organisation of the Punjab Bird Festival. — TNS

Situated in the foothills of the Shivaliks, Siswan has dense forests, pristine water and rich biodiversity making it a perfect destination for nature lovers 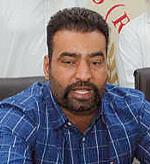