The controversy over the vaccine supplied to private hospitals in Punjab seems to be getting murkier with the government on Friday withdrawing the stock.

The government has been accused of selling over 1.40 lakh doses of Covaxin, which they got at Rs 400 each, to 20 private hospitals for over Rs 1,000.

Principal Secretary Hussan Lal said the government had supplied 40,000 doses and only 1,000 were administered by private hospitals. "We have taken back the remaining stock," he said.

Punjab’s Health Minister Balbir Singh Sidhu said later in the evening that his government had withdrawn the order of providing one-time limited vaccine doses to private hospitals and that the vaccines will be administered free of cost to ages18-44 years at government vaccination centres.

About 42,000 doses have been allotted to the private hospitals from which only 600 doses have been administered to people, Sidhu said, citing information provided Vikas Garg, by the nodal officer in charge of vaccination in Punjab.

Instruction has been issued to all Civil Surgeons that no fresh allotment is to be made to any private hospitals and the private hospitals should return forthwith all the vaccine doses available with them, he said.

BJP national general secretary Tarun Chugh has slammed the government for allegedly commercialising the sale of vaccine at a time when Punjab had recorded the highest Covid mortality rate in the country.

He said a criminal case should be registered against all those involved in the alleged “vaccine scam”. He said: “The vaccine was provided by the Centre for poor working class but was sold on commercial rates to private hospitals who in turn made huge money out of it."

Chugh said it was pure “black marketing” by the state government, adding that, "All this happening when Punjab last month recorded 2.7 per cent Covid death rate, which was the highest in the country.” He demanded the Centre to take action against the government.

"It's dangerous news. They (Punjab government) got over 1.40 lakh doses of Covaxin at Rs 400 each. And they gave some of the vaccines to 20 private hospitals at Rs 1,000 each. The state government wants to make a profit from the vaccination. What kind of government is this?" he charged.

He said: "It is shameful that when Punjab was suffering the worst in the country due to Covid the ruling party ministers and MLAs are busy settling personal scores", adding that, the Punjab government functioning has completely collapsed and it was time for the Governor to intervene.

Meanwhile, the Centre has sought a clarification from the Punjab government following media reports alleging that it "sold" Covid-19 vaccine to private hospitals and "earned a profit. 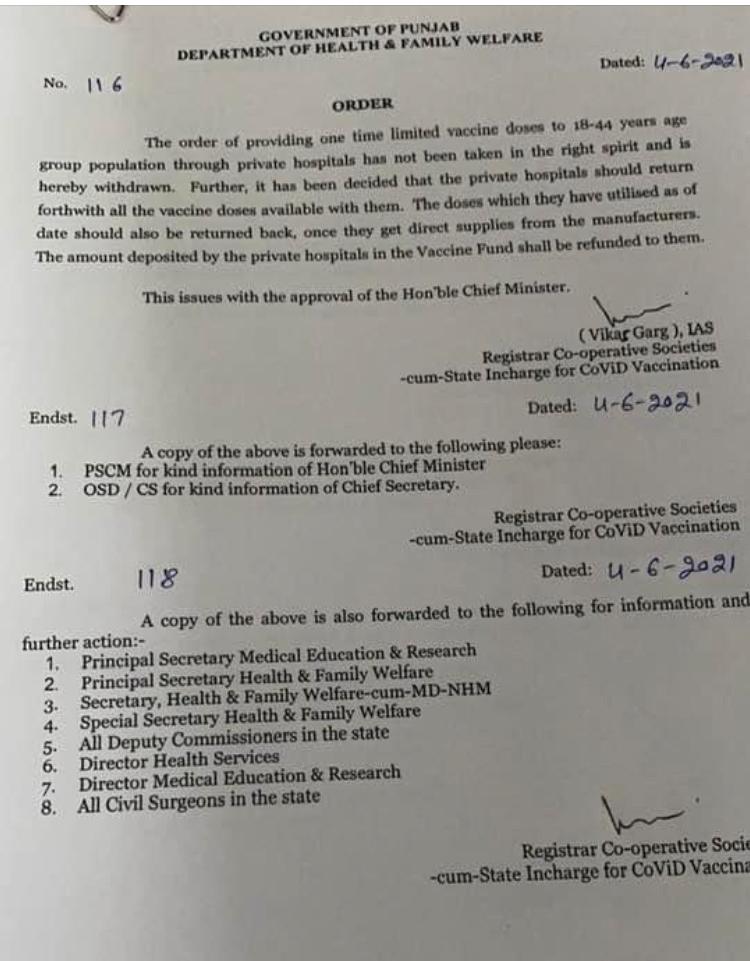