Singh has also appealed to the farmers not to burn the crop residue, as it could aggravate COVID conditions apart from leading to pollution spread. 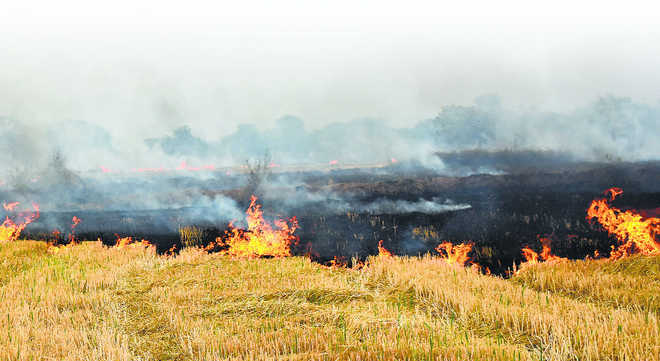 In a series of measures to check stubble burning in the ongoing Kharif season, the Punjab government has appointed 8,000 Nodal Officers in the Paddy growing villages of the state

In a series of measures to check stubble burning in the ongoing Kharif season, the Punjab government has appointed 8,000 Nodal Officers in the paddy growing villages of the state, with 23,500 more machines being given to farmers for in-situ management of paddy straw.

Chief Minister Captain Amarinder Singh has also appealed to the farmers not to burn the crop residue, as it could aggravate COVID conditions apart from leading to pollution spread.

Seeking the support and cooperation of the farmers in preventing stubble burning amid the pandemic, he said that experts had warned it could have serious implications for the vulnerable people, already suffering from other lung and other diseases.

Captain Amarinder said while he had been repeatedly following up with the Prime Minister for compensation to the farmers for defraying the cost on the management of paddy straw, the state was also taking various steps to educate the farmers about the problem. The state government has been seeking from the Centre Rs 100/quintal as compensation to enable the farmers to manage the paddy straw without burning it.

The nodal officers, who will be working in the villages till November 15, will work in close coordination with the staff of Cooperation, Revenue, Rural Development & Panchayats, Agriculture, Horticulture and Soil Conservation Departments, as well as the Punjab Pollution Control Board and the Guardians of Governance. Armed with a Super SMS system, these officers will also prepare lists of owners who have given their land on rent and then call each landowner on phone with the warning that a red entry shall be made in their land record if they fail to ensure that no paddy straw is burning.

The nodal officers will create awareness in villages through CRM machines, distribution of pamphlets/leaflets, announcements from Gurudwara or by other modes, personal interaction with village schools for organizing rallies and awareness lectures to students who can create further awareness among their parents and other farmers in their villages.

The Agriculture Department has also deputed a dedicated team at the Call Centre on Toll-Free No. 1800-180-1551 for quick resolution of the queries of farmers about farm machinery for paddy straw management.

The Chief Minister said as part of the state’s stubble management strategy, the Agriculture Department, which he heads, 23,500 more agri-machines are being provided this year to farmers, either individually or in groups or through cooperative societies at a subsidy ranging from 50% to 80%. This is in addition to 51,000 paddy straw in-situ management machines provided over the past two years.

Further, various sites have been identified/ earmarked in the districts for collection of residues in Common Lands /Cattle Ponds and Gaushalas, where farmers or any entrepreneur can store paddy straw. This stored basmati residue can be transported to places where it can be used as cattle fodder, said the Chief Minister, adding that the District Administration had been directed to facilitate the logistics for transportation of the straw from these sites. The Punjab Government has approached to the Chief Secretaries of the adjoining States for the procurement of this paddy straw and queries had been received so far from the State of Uttarakhand, said the Chief Minister.

Additional Chief Secretary (Development) Anirudh Tiwari said that State Government was also taking appropriate legal and administrative measures, besides creating awareness among people, to curb the menace of paddy stubble burning in view of the pandemic.

Notably, Paddy has been grown over 27 lakh hectares of land in Punjab this year. This includes cultivation of Basmati on 7 lakh hectares. Cumulatively, this is expected to yield paddy residue of 16.50 million tons.