Gears up for vaccination at 110 sites on Jan 16 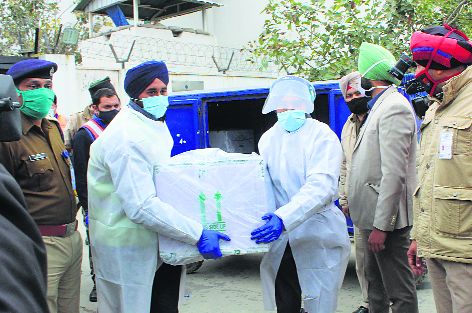 Health officials receive the first batch of Covid vaccine at the Chandigarh airport in Mohali on Tuesday. Vicky

The state government today received 20,450 vials of Covishield vaccine. With this, Punjab is all set to inoculate health workers at 110 sites on January 16.

Health Minister Balbir Singh Sidhu said the first batch of the vaccine was received by the EPI officer of the Health and Family Welfare Department at the Chandigarh airport. He said Covishield, developed by Oxford University and AstraZeneca, was being manufactured in India by Serum Institute of India.

The minister said five vaccination sites per district had been selected for the launch and each site would cater to 100 beneficiaries.

Giving details of the ‘cold chain’ preparations made for the vaccine, the minister said at present, the vaccine had been stored at State Vaccine Store, Sector 24, Chandigarh, and would be made available at regional, district and block vaccine stores as per the SOPs of the Government of India.

He further said every vaccination session would be managed by a five-member team with defined responsibilities. The first vaccination officer at the entrance would ensure that only eligible vaccinators enter the site, the second one would verify the beneficiaries on CoWIN, the third would administer the vaccine, the fourth one deputed at the observation room would monitor adverse event following immunisation, if any, and the fifth officer would assist in crowd management.