Construction workers to get COVID jab in Punjab’s first phase 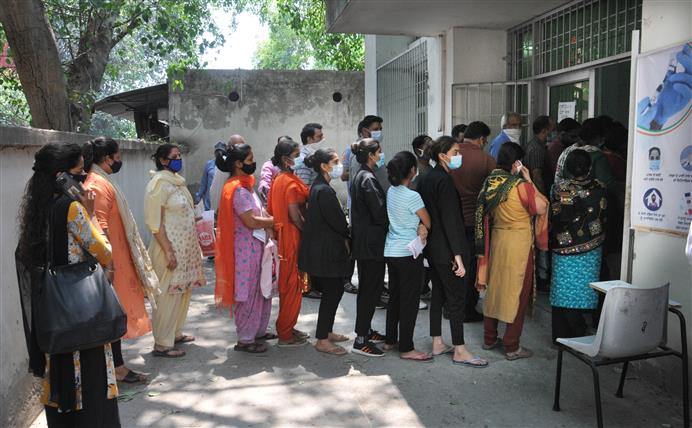 A long queue of beneficiaries waits at a vaccination centre at the civil hospital in Jalandhar. Tribune file photo

Construction workers will be covered in the first phase of the coronavirus vaccination drive for those aged 18 and above that starts on Monday, said state Health Minister Balbir Singh Sidhu on Sunday.

Sidhu said the Health Department has received one lakh doses of the COVID-19 vaccine for the 18-44 age group, whose vaccination will start from Monday across the state.

Earlier in the day, an official statement quoting Sidhu had said the government had decided to cover construction workers and their family members in the first phase.

Later, in an amended statement, it did not mention family members but said construction workers will be vaccinated in the first phase.

In May, the minister said government employees, construction workers, teachers and other staff at government and private educational establishments will be covered under the drive for the 18-44 age group.

The minister said the Punjab government had placed an immediate order of 30 lakh doses with Serum Institute of India Ltd and has been told that 4.29 lakh doses for the group will be given in the month of May.

Individuals with co-morbidities are at the highest risk, hence, 70 per cent of doses have been allocated to this group in the next phase, he said in an official statement here.

He further said the state government is developing a plan for the evaluation of vaccine effectiveness.

This will be valuable in designing further control efforts, he said. — PTI