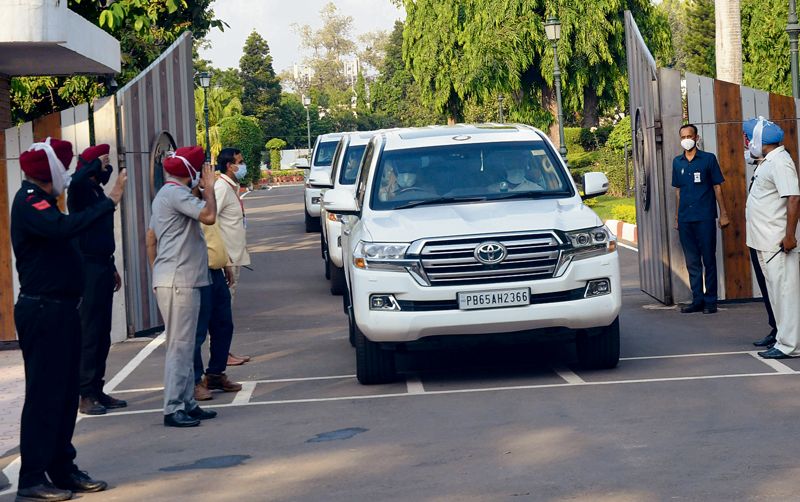 Capt Amarinder Singh comes out of Raj Bhavan after submitting his resignation to the Governor. Tribune photo: Manoj Mahajan

The sudden and unceremonious exit of Chief Minister Capt Amarinder Singh signals the pre-eminence of the Gandhi siblings in the decision-making structure of the Congress and holds lessons for party veterans going forward.

“The message in the story is — anything is possible,” said a Congress insider describing the midnight decision of the AICC to convene a Punjab CLP meeting on Saturday as a “surgical strike” on Capt Amarinder whom, sources said, Rahul Gandhi and Priyanka Vadra increasingly viewed as “inaccessible, close to SAD and low-performing”.

The trigger for Singh’s resignation was a recent letter nearly 60 party MLAs (out of 80) wrote to Congress president Sonia Gandhi seeking CM’s replacement to offset “anti incumbency” and saying in no uncertain terms that they will not be able to work with him anymore.

“With the majority MLAs against the CM, there was no option but to replace him,” said a Congress functionary explaining that the party gave Amarinder Singh ample time to set the house in order.

While Sonia Gandhi, known to have backed Amarinder Singh against graver rebellions specially the one by Rajinder Kaur Bhattal, gave the CM a long rope, Rahul and Priyanka are learnt to have pressed for something “drastic” specially after the BJP overhauled the entire Gujarat cabinet.

Among issues that weighed against Singh were – he was not meeting MLAs regularly enough and the distance had led to alienation among lawmakers and party workers; he addressed few public functions in Punjab; thirdly, even ministers did not have direct access to him.

“Inaccessibility remained a major challenge with Amarinder Singh and continued to be repeatedly raised finding traction with Rahul and Priyanka,” said a source.

The majority of Punjab leaders had hoped the Congress leadership would replace the CM when they appointed Sidhu as state chief, to avoid parallel power centres. Two months on (Sidhu was named Punjab chief on July 18), the two were still at loggerheads, with Rahul and Priyanka worried what would happen at the time of candidate selection if both continued with their bitterness.

“The calculation earlier was that the party needs both the CM and Sidhu to win but over these past two months, the bickering caused visible damages to the Congress, as AICC surveys reflected. A need was felt to course correct. After the majority MLAs expressed no confidence in the CM through a letter, scales tilted against him,” said a party insider adding that the CM’s position became untenable after Sonia Gandhi directed that a CLP meet be called.

Veterans are however cross with Rahul and Priyanka over the way Singh’s ouster was handled with MLAs learnt to be in touch with Priyanka.

This development, they said, would have repercussions in Rajasthan and Chhattisgarh where infighting is deep. “Now Sachin Pilot can demand his pound of flesh against CM Ashok Gehlot and Chhattisgarh health minister TS Singhdeo can remind Rahul Gandhi of his 2018 promise to rotate the CM’s post. Pandora's Box has been opened,” said a source adding that Singh, a known Sonia loyalist, deserved a better exit plan.

Sources added that public humiliation of Singh – as the outgoing CM himself claimed today after resigning – was totally avoidable and "harmed the Congress."

“Congress President could have easily called CM and Sidhu and resolved matters rather than have MLAs speak against the CM on a platform offered by the AICC. This exercise of calling MLAs to Delhi in the name of resolving the Punjab crisis bore the stamp of Rahul Gandhi. This is not Sonia Gandhi’s style,” said a veteran.