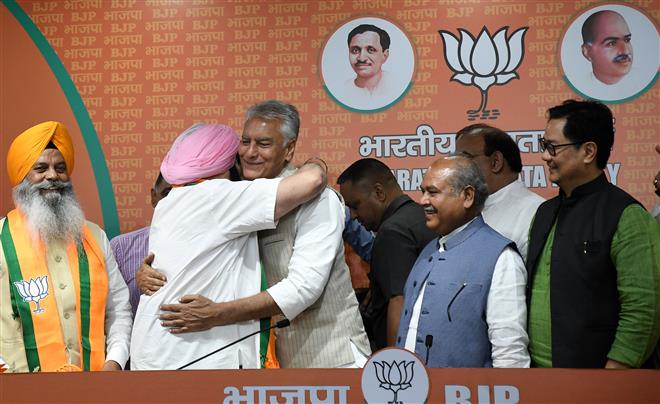 Resistance from within the BJP and the “taint of corruption” sabotaged the switchover of several Congress leaders to the saffron party at the last moment in Delhi yesterday. The Congress leaders were expected to join the BJP along with former Chief Minister Capt Amarinder Singh.

These Congress leaders could have been of advantage for the BJP as they enjoy a mass base in their respective constituencies.

However, opposition from within the BJP’s Punjab unit and taint of corruption in some cases sabotaged their switchover. BJP sources said Rana KP Singh, who hails from Nangal, was on his way to Delhi yesterday, but he could not join the party as there was strong opposition from a leader from the same area, who was projecting his son from the Anandpur Sahib constituency. Rana KP confirmed that till the last moment, he was certain to join the BJP, but the Congress high command pursuaded him and resolved the issues he had been raising for some time.

Similarly, former Cabinet Minister Sadhu Singh Dharamsot was cold-shouldered by the BJP high command due to the corruption cases being faced by him, especially the SC scholarship scam.

Even former Deputy Chief Minister Om Parkash Soni’s name was doing the rounds. A few days ago, Soni had met Capt Amarinder Singh. His name was also struck down by the BJP high command. However, Soni denied that he was ever willing to join the BJP. The inclusion of another former Cabinet Minister from Malwa Vijay Inder Singla was strongly opposed by two BJP leaders from the Sangrur Lok Sabha constituency, who joined the saffron party a few months ago after leaving the Congress.

A senior Congress leader said last-minute efforts by senior party leader Ambika Soni prevented the switchover by the former Speaker. “The top leadership prevailed upon the leaders to settle his grouse,” he said.

They were being pursuaded by Capt