In 2016, the gurdwara was vandalised with ‘swastikas’; police investigating matter 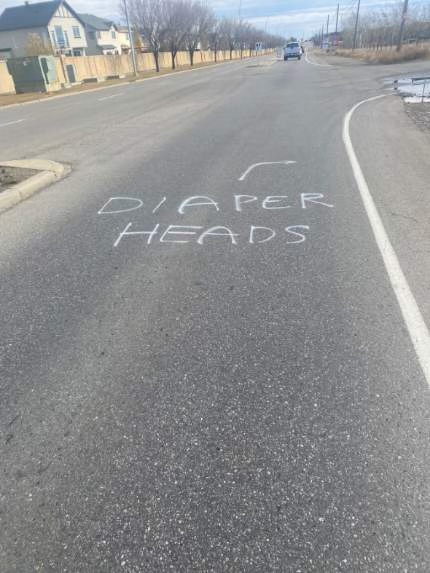 World Sikh Organisation of Canada condemned the racist vandalism that took place on the road leading up to the Sikh Society of Calgary Gurdwara early Monday morning.

The roads leading to its entrance of Southwest gurdwara in Calgary in Canada has been sprayed with hateful graffiti. Members of Calgary Sikh community and Punjabi NRI MPs and MLAs in Canada have condemned the act.

Sikh Society of Calgary was the target of racist vandalism today. Gurdwara security footage failed to capture evidence of those behind the hateful messages. The city had the graffiti removed after police attended the scene. In 2016, the same site was vandalised with ‘swastikas’.

Calgary police said, “We are aware of the graffiti incident that occurred at the @DashmeshC. Our Diversity unit is working closely with the community. This action is unacceptable and we are committed to conducting a thorough investigation to hold the responsible parties accountable.”

Dasmesh Cultural Centre, which runs NE Calgary Sikh Gurdwara has tweeted, “We are extremely disappointed and saddened to hear our SW Gurdwara Sahib had racist graffiti sprayed outside on roads leading up to entrance. While we believe this is the actions of a few, we encourage everyone to accept everyone as one and take the time to learn about your neighbours. Doors to our Gurdwara Sahib are open to all, we encourage you to visit and learn about Sikhi. While this display of racism is very hurtful, we want to take this time for all of us to come together and show support to all people regardless of background or beliefs.”

The World Sikh Organisation (WSO) of Canada condemned the racist vandalism that took place on the road leading up to the Sikh Society of Calgary Gurdwara early Monday morning. This isn’t the first time the Gurdwara Sahib was targeted by racist attacks. In 2016, this Gurdwara had ‘swastikas’ painted on it.

MP from Calgary Forest Lawn Jasraj Singh Hallan tweeted, “Despite being called many things throughout my life for wearing a turban, I still stood proud being in Canada free to express myself. I stand with the Sikh Society of Calgary in condemning this act of hatred. Canadians always stand against intolerance.”

Rajan Sahwney, transport minister and MLA from Calgary North East tweeted, “I am also very sad, disappointed and disgusted by this behaviour. @DashmeshC, you have been a beacon of hope for so many, particularly during Covid. Please continue in Chardi Kala and keep inspiring, educating and encouraging others!”