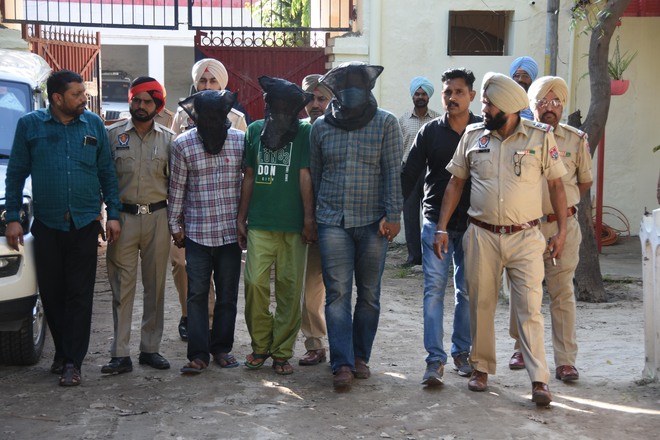 The accused in police custody in Ludhiana on Saturday. Tribune Photo: Himanshu Mahajan

The Commissionerate Police have cracked the Friday’s sensational robbery of Rs 35 lakh at Kismat Complex near Miller Ganj Chowk within 12 hours by apprehending three accused, including the security guard-cum-bouncer of the gold-trading firm.

The accused have been identified as Gagandeep Singh (34) of Halwara, a security guard-cum-bouncer working with the firm, who was present on the crime spot, his relative Satnam Singh (27) of Dhilwa, Barnala, and Sandeep Singh (24) of Raikot. The police have recovered Rs 25 lakh from Satnam and the remaining Rs 10 lakh from Sandeep. A bike and an air pistol used in the crime have also been seized.

Addressing a press conference, Commissioner of Police Gurpreet Singh Bhullar said Gagandeep and Prince, employees of Shankar Metals, complained to the police that two bike-borne persons looted a bag containing Rs 35 lakh from them at gunpoint on Friday evening at Kismat Complex near Miller Ganj Chowk.

The team scanned all CCTV cameras of the area and found holes in the story revealed by Gagandeep who failed to show any resistance despite having .32 bore licensed revolver with himself at the time of the crime. The team zeroed in on him and during interrogation, he confessed the crime.

The top cop said Gagandeep along with his relative Satnam and Sandeep had hatched the entire conspiracy of looting the cash. Gagandeep was working with the firm since February 2021 as security guard-cum-bouncer.

He said Satnam was a master’s-degree holder and was unemployed. His brother Ranjeet Singh was lodged in jail for a murder case. Sandeep had studied till Class VIII and he became friends with Satnam in a gym

Prince, who was also accompanying the conspirator Gagandeep, was not aware about the plan of the latter.

CP Bhullar said since a huge transaction of Rs 35 lakh was involved, the police are also writing to the Income Tax-authorities for the verification of the gold transaction involving huge sum.