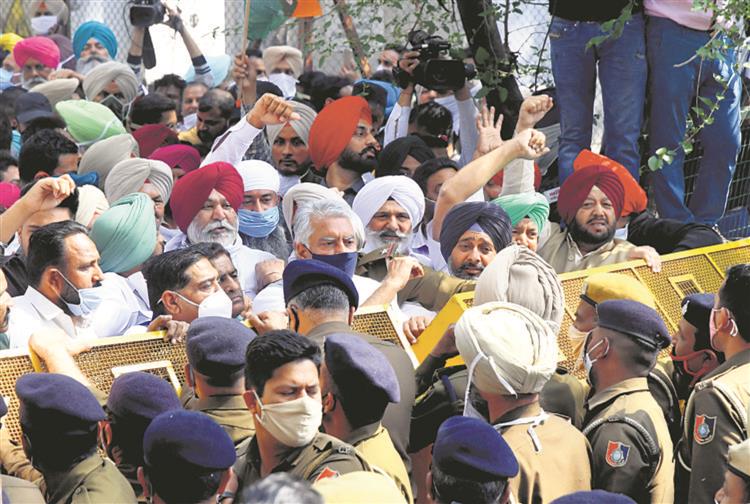 PPCC chief Sunil Jakhar with other party leaders during a protest against rising fuel prices near Raj Bhawan in Chandigarh. Photo: Nitin Mittal

The first day of the Punjab Assembly’s Budget session saw political drama unfolding outside and inside the House during the Governor’s Address. While the ruling Congress protested against the Modi-led BJP government over the rising fuel and LPG prices, the opposition parties targeted the state over its “unfulfilled” poll promises and the Centre for not repealing the farm laws.

Kishor is Principal Adviser to Captain

Chandigarh: Punjab CM Capt Amarinder Singh on Monday said poll strategist Prashant Kishor had joined him as his principal adviser. Kishor had handled the Congress poll campaign in 2017 when the party bagged 77 of the 117 seats in the Assembly.

Chaos prevailed as SAD MLAs led by Bikram Majithia stormed into the Well of the House and raised slogans against Governor VP Singh Badnore for not forwarding to the President amendments passed by the House to counter the farm laws. AAP MLAs led by Harpal Cheema joined the Akalis. Lok Insaaf Party MLAs Simarjit Bains and Balwinder Bains too protested against the Governor.