Dares govt to put him behind bars 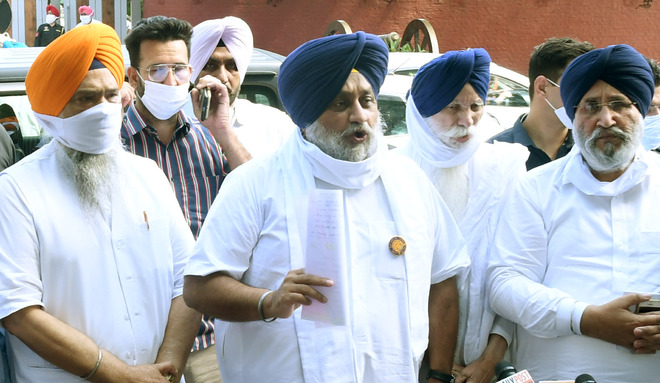 SAD chief Sukhbir Singh Badal and other party leaders after meeting the Governor in Chandigarh on Friday. Photo: Pradeep Tewari

Launching an attack on the new Congress government, SAD chief Sukhbir Singh Badal today asked Chief Minister Charanjit Singh Channi to arrest him instead of searching for police officers to do the job.

Talking to mediapersons after submitting a memorandum to the Punjab Governor on farmers’ issues, Sukhbir said there were reports that the government was planning to arrest some Akali leaders on “cooked-up charges”.

“We are ready. Don’t waste your and state’s time. Quench your vendetta thirst. Tell us where you want us, and we will come for the arrest. They are targeting us because they know their days are numbered. They are scared and are whistling in the dark,” he said.

Sidhu begged for and got car (for security) from Captain and even got Sonia and Rahul to intervene. He is not in govt but still using the same car. — Sukhbir Singh Badal, SAD chief

Sukhbir claimed the government was calling officers and “offering them powerful posts” in the police as reward for readiness to arrest Akali leaders.

“Many of these officers have been calling us to tell us of the unprecedented pressure being put on them. I have told them to follow what the government says. But we will be watching who steps out of the constitutional line.”

To a query on the role of PCC chief Navjot Singh Sidhu in government decisions, Sukhbir asked Channi not to allow “an extra-constitutional Super CM to treat him as a dummy and rubber stamp”.

He claimed the government wanted to “cover own ineptitude” with vendetta and high-profile arrests. “But you cannot browbeat us,” he added.

The SAD president said the recent events within the Congress suggested they were trying to divide Punjab along the communal and caste lines, posing a threat to the multi-cultural and secular ethos of the state handed down by Gurus, sages and Sufi saints. “The old Congress agenda of divide and rule is back.” — TNS