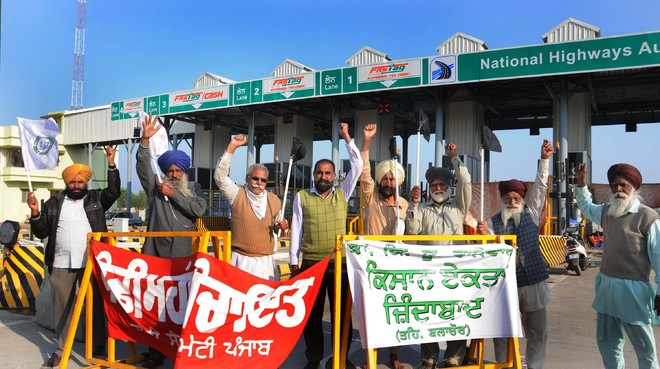 Farmers protest the central agricultural laws at a toll plaza near Balachaur in Nawanshahr on Wednesday. Photo:Malkiat Singh

Farmers across the state today observed the ‘Anti-repression Day’ against the attempts being made by the Delhi Police to arrest farmers from Punjab and book farm union leaders in allegedly fake cases.

As part of this, the farmers staged dharnas at 35 places across the state and gave memorandums to the President of India, through the local civil administration heads. The protesting farmers alleged that the Delhi Police, under the influence of the Centre, was trying to hit out at the farmers struggle going on at the borders of Delhi, by booking leaders and farmers in cases.

Prem Singh Bhangu, chairman of the Legal Committee of the Sanyukt Kisan Morcha (SKM), said the farmers were demanding immediate release of the farmers lodged in Tihar jail at Delhi. “We also want that notices issued to hundreds of farmers in Punjab, Haryana, Uttarakhand and Uttar Pradesh by the police, NIA and other government agencies, should be scrapped,” he said.

Jagmohan Singh Patiala, general secretary of BKU Dakaunda, said farmers were left with no option but to seek the intervention of the President to stop the repression unleashed on them, in a bid to end the farmers’ struggle. — TNS