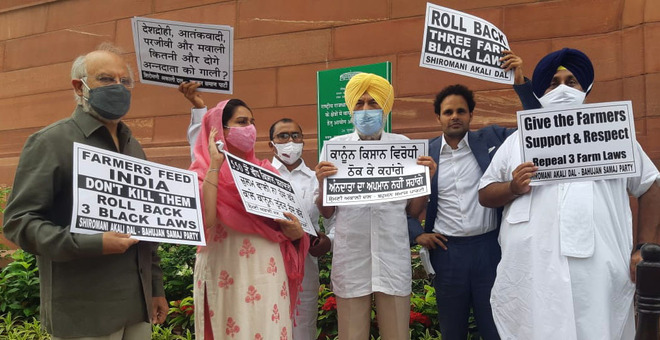 Congress leaders on Monday protested the three farm laws with several party leaders courting arrest. Congress general secretary Randeep Surjewala, Youth Congress chief BV Srinivas and others were taken into preventive custody by the Delhi Police for violating Section 144 of CrPC orders around Parliament. The leaders were later let off.

Congress MPs, including Partap Singh Bajwa and others with those of the Shiromani Akali Dal (SAD) repeated their adjournment notices in Parliament today to discuss farmers’ issues, but all were disallowed.

The SAD also protested outside Parliament chambers today with party president Sukhbir Singh Badal urging political outfits to unite and press the government for the repeal of farm laws.

The protests featured SAD-BSP MPs, including Harsimrat Kaur Badal, Balwinder Singh Bhunder and Naresh Gujral. “The SAD-BSP alliance has followed a pro-farmer agenda from the first day of the Parliament session and would continue to raise this issue for the remainder of the session,” Sukhbir said. The AAP also gave an adjournment notice in Lok Sabha today. — TNS