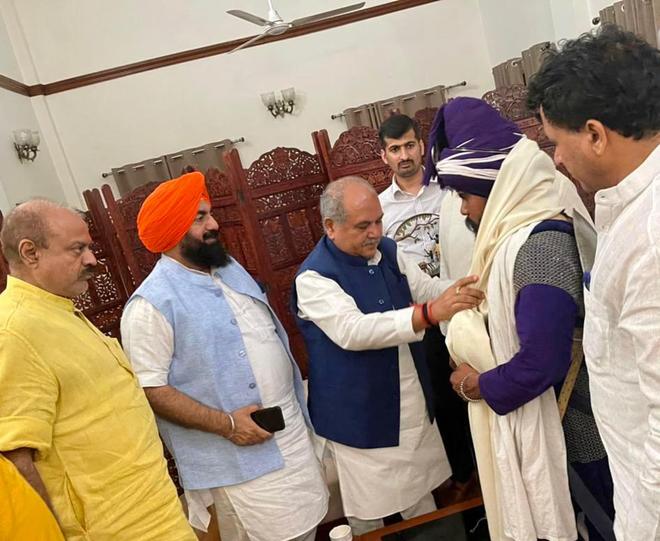 Agriculture Minister NS Tomar welcomes Baba Aman Singh during one of their meetings.

Nihang leader Baba Aman Singh, who is at the centre of The Tribune exposé on his secret meeting with BJP ministers, reportedly admitted today in various media interviews that he met Union Agriculture Minister Narendra Singh Tomar and others.

Also read: Nihang chief Baba Aman Singh may have been part of efforts to end stir

He also claimed a “BJP leader (not minister) offered Rs 10 lakh in cash, besides some horses” for vacating the Singhu dharna site, but he declined.

The statement came after mediapersons sought his reaction to a report published in The Tribune on his meeting with BJP ministers in July. Neither the BJP leaders nor the Nihang leader had made the meeting public earlier.

Baba Aman Singh claimed they did not take the money. However, “around Rs 1 lakh was offered at a gurdwara”.

He claimed they would lift the dharna only after the “black” farm laws were withdrawn, continuance of the MSP system was assured, there was justice in the sacrilege incidents, and the cases were withdrawn.

Baba Aman Singh did not respond to calls by The Tribune today. BJP leader Sukhminder Grewal also did not take calls on claims made by the Nihang leader.

On media queries to Nihang Baba whether they discussed the meeting with farm unions, he reportedly said they did not have to talk to farmers. Claiming he did not go alone to meet Tomar, the Nihang leader said at least 10 members of their “fauj” were with him.

The report has caused a stir with questions being asked on why the meeting took place. Four members of the Nihang group have been arrested since Friday for the murder of Lakhbir Singh, who was accused of committing sacrilege.

The Nihang leader also told a media house that senior functionaries of the sect would meet on October 27 in New Delhi to decide whether to continue their dharna at the Singhu border or not.

In response to queries on the purpose of the meeting and the presence of murder convict and dismissed cop Gurmeet Singh Pinki, the Nihang Baba said everything would become clear to the “sangat” in the next few days. He said for them, the fight for the religion was supreme and then came the farmers’ issue.

Meanwhile, Randeep Singh Surjewala, national spokesperson for the Congress, has sought a high-level investigation into the meeting between the Nihang and BJP leaders.