One of them consumes poisonous substance 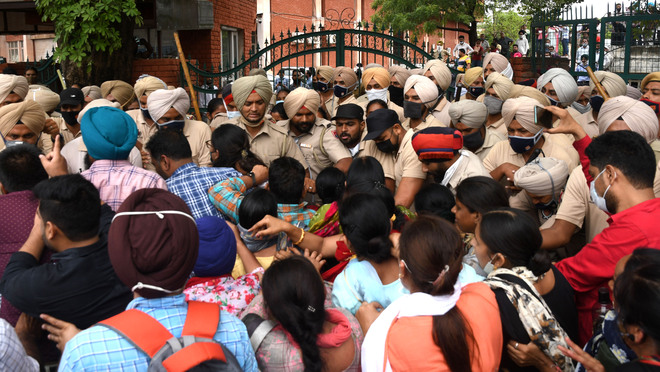 An umbrella group of six teachers’ unions laid siege to the Punjab School Education Board (PSEB) building in Phase IX today. They were seeking job regularisation and enhancement in salaries.

Nearly 500 teachers gheraoed the building around 10.30 am, taking PSEB officials and administration by surprise. The protesters raised slogans against CM Capt Amarinder Singh, Education Minister Vijay Inder Singla and Education Secretary Krishan Kumar for not fulfilling their demands for the past four years.

Around five persons also climbed to the top of the building with petrol-filled bottles. Eyewitnesses said one protester tried to jump off the roof of the building, but was stopped by his colleagues. Another teacher, identified as Rajwinder Kaur of Malout, allegedly consumed a poisonous substance. Heavy police force, led by Mohali SSP Satinder Singh, reached the spot and barricaded the area. Teachers and police indulged in a mild scuffle after breaking the barricades.

Sources said government officials and a group of teachers were engaged in negotiations till late in the evening.

The protesters claimed that a meeting of the teachers with the minister yesterday was postponed till June 22. The agitated teachers, including women, staged a sit-in and claimed they would not vacate the area without reaching any conclusion. There are nearly 13,000 temporary teachers, some of them employed 18 years ago, who are paid between Rs 3,000 and Rs 10,000 a month.

The SSP said, “All employees inside the building have been allowed to come out. The protesters are still there. Representatives of the union are holding a meeting with Capt Sandeep Sandhu, political secretary to the CM, in Ludhiana.”