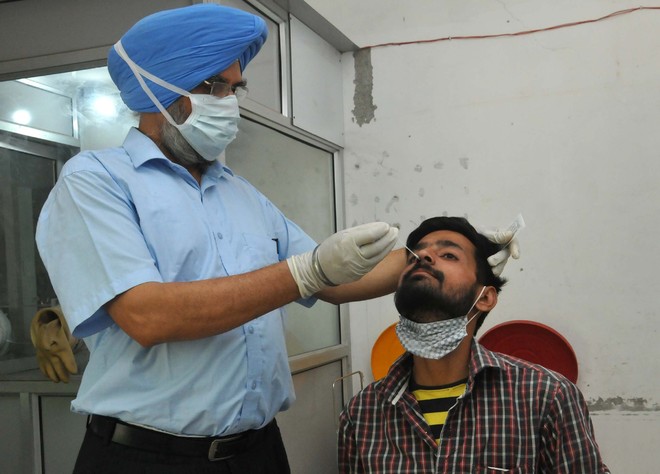 A health worker collects a swab sample at the Jalandhar Civil Hospital.

Several districts today ran out of Covaxine stock as a large number of patients in district hospitals were turned away.

The biggest sufferers were those who required the second dose. Among prominent hospitals that faced the problem included the Mohali district hospital where patients who were scheduled to get the second shot at four weeks were refused one due to shortage.

Sources revealed that several districts which still have the vaccine are also quickly running out of stock. In Barnala, only 4,000 doses were left. Dr Balwinder Kaur, in charge of the state’s Covid vaccination programme, accepted the shortage of Covaxin at certain places. “But we will get the sufficient stock tomorrow,” she said.

In Jalandhar, at least 11,000 persons, who received the first dose of Covaxin in the first week of March, were left disappointed. While the Astra-Zeneca Covishield saw much enthusiasm in the district, Bharat Biotech’s Covaxin, got off to a slow start. Against Covishield’s 2.6 lakh doses, only 11,000 doses of Covaxin were administered in the district.

A patient from Jalandhar said: “We have been assured that the vaccine will be made available in one or two days. Though I know the department is working hard, the current situation has triggered panic as the second dose is essential to fight Covid.”

District Immunisation Officer Dr Rakesh Chopra, too, had received Covaxin dose on March 20. “The vaccine will arrive tomorrow. The patients will get the vaccine within the stipulated time as the second dose can be administered after a six-week gap,” he said.

The Health Department said they had received 1.34 lakh doses of Covaxin of which 1.06 lakh had been used and 2 lakh doses would arrive tomorrow.