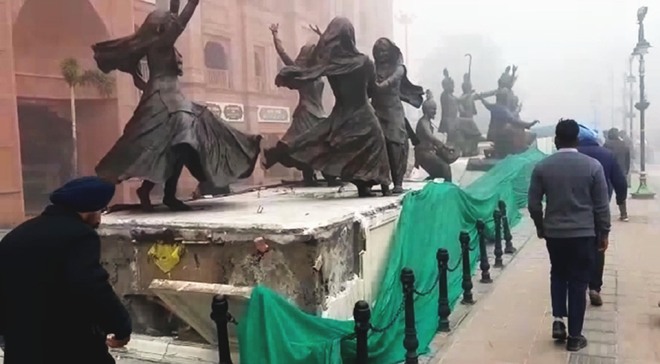 The vandalised part of some statues at Heritage street in Amritsar. Tribune file photo

Punjab Chief Minister Amarinder Singh on Tuesday ordered the relocation of statues of folk dancers from the vicinity of the Golden Temple, days after they were vandalised, according to a government statement.

It said Singh also asked the Punjab Police chief to review the cases registered against the seven Sikh youths accused of the alleged vandalism and withdraw the stringent sections of Indian Penal Code (IPC) slapped against them.

“Taking into account the sentiments of the Sikh community which had taken exception to the statues of folk dancers at the Heritage Street in the vicinity of the holy Darbar Sahib Amritsar, Punjab Chief Minister Amarinder Singh ordered the Cultural Affairs Department to shift and relocate the same to some other appropriate place in Amritsar,” the government statement said.

The statues were vandalised by a group of youths on January 15 in a fit of emotional outburst.

The youths were objected to the installation of statues, displaying Bhangra and Giddha, close to the precincts of the Golden Temple. They had broken the platforms on which these statues were erected.

Some people protesting over the location of statues, claimed they violated Sikh religious sentiments as they were installed near the Golden Temple.

The Bhangra and Giddha diorama was installed by the previous SAD-BJP government in October 2016 on the pedestrian path of the Heritage Street.

“The actions of the youth were not malicious but a reflection of the pain felt by the Sikh community which felt hurt at the statues,” Singh said, taking a lenient view of the youths involved in the alleged vandalism.

The Jathedar (head priest) of Akal Takht (supreme temporal seat of Sikhs) has already formed a three-member committee to pursue the relocation of statues to some other place in Amritsar. — PTI