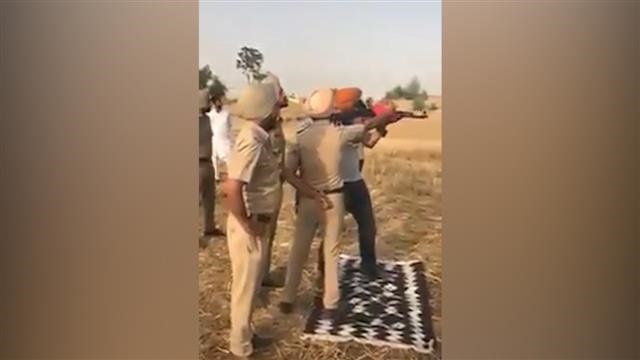 A videograb of Sidhu Moosewala shooting at a firing range.

Facing imminent arrest after the addition of Arms Act in the FIR registered against them and Punjabi singer Sidhu Moosewala, four cops have moved anticipatory bail applications in Sangrur court, which has issued a notice to the state for May 26.

“Constables Harwinder Singh and Jasveer Singh, Head Constable Gurjinder Singh, and ASI Balkar Singh have filed applications for anticipatory bail. The court of Additional District and Sessions Judge has issued a notice to state for May 26,” said advocate Sumir Fatta, counsel of all four cops.

On May 4, after a video showing the singer shooting at a firing range in Badbar of Barnala district went viral on the social media, the Dhanauala police, on the directions of Punjab DGP Dinkar Gupta, had registered a case under Section 188 of the IPC and Section 51 of the Disaster Management Act against Moosewala and five policemen.

But within 24 hours, another FIR was also registered against all under the same sections at Dhuri Sadar police station on May 5 after another video showing Moosewala firing from his private pistol at Laddai Kothi shooting range surfaced.

On May 17, police had added Sections 25 and 30 of the Arms Act 1959 to both FIRs registered against Moosewala and others.

All cops were suspended after the registration of FIR and since the addition of Arms Act in both FIRs, cops of both districts have been conducting raids to arrest the accused.