They were on 5-month internship 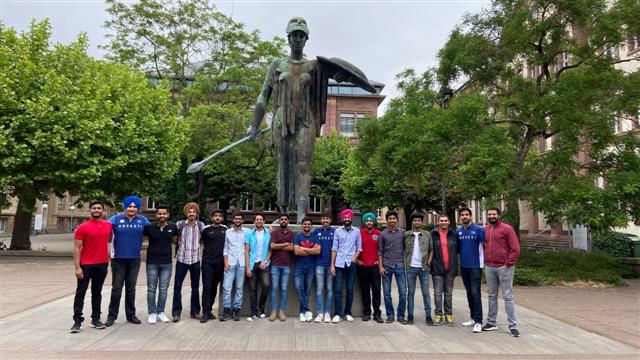 Students of Punjab Engineering College (PEC) who were on a five-month long internship programme at Karlsruhe in Germany. Tribune photo

For 17 students of Punjab Engineering College (PEC), a five-month internship programme at Karlsruhe (Germany) would remain a nightmare for the rest of their lives.

The students, who returned to the city on Friday, were stuck in Germany amidst the Covid-19 lockdown.

Sangrur's Shantanu Chawla (21) said they would spend each day hoping to return home. He is one of the students selected to attend the internship programme at Karlsruhe Institute of Technology (KIT). A third-year student of Production and Industrial Engineering at PEC, Chawla had left for KIT in January this year.

“The first two months were good. My internship started from January 7. There were a few Covid cases at that time and the situation was not as grave. However, on March 22, suddenly all flights were stopped and institutes were closed. I was getting 511 Euros per month (approx Rs 41,000) from the KIT University to bear my living expenses. But still I had to ask help from my family, as this was not enough,” said Chawla.

He added: “Due to the pandemic, I was advised by the KIT authorities to leave for India as soon as possible. They even booked a flight for me, but unfortunately, the flight got cancelled. Later, as we remained stuck we contacted PEC Director Dheeraj Sanghi and other deans who helped us.”

Students claimed to have approached the Indian Embassy, but allegedly received a little help. “We got a confirmation from the Indian Embassy (in Berlin) that there is a flight from Frankfurt to New Delhi on May 28 (as per German schedule). But it was only for the residents of Delhi-NCR, Haryana and Chandigarh. Some of the students are from Punjab,” said Arshvir Singh from Mechanical Branch.

“From 17 students, only five or six received the link for the repatriation of that flight. We again approached our teachers in PEC and got a contact of one of our alumni, who was a consulate officer at Consulate General of India at Frankfurt. She helped us in completing necessary formalities. Our Director wrote to the UT Administration, Punjab Government, Ministry of External Affairs and Indian Embassy in Berlin. PEC helped all of us, including Uday Raghuvanshi, Rajat Goyal, Sahil Mehta, Ankit Billa and Gurpreet Singh, board the same flight,” he added.

These students landed in New Delhi on Friday and were later brought to Chandigarh. They have been put under 14-day quarantine at a hotel in Sector 17.