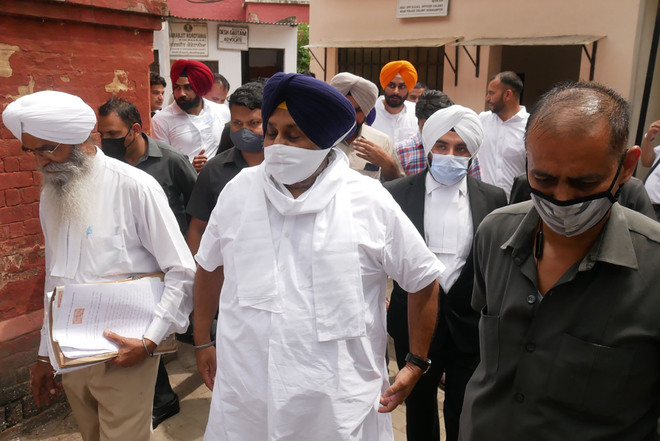 SAD chief Sukhbir Badal at a court in Hoshiarpur on Wednesday.

Shiromani Akali Dal president Sukhbir Badal, along with party leader Daljit Singh Cheema, today appeared in a trial court at Hoshiarpur in connection with the “dual constitution” case against the SAD.

The court of CJM Rupinder Singh granted bail to the SAD chief after he furnished a personal bail bond of Rs 1 lakh. He was represented by senior advocate Harjinder Singh Dhami in the court.

The next hearing in the case will be held on September 28. Socialist Party leader Balwant Singh Khera, who is the complainant in the case, was represented by advocate BS Riar. Senior Akali leader Daljit Singh Cheema is already out on bail in the same case.

Khera said the case was filed against the SAD for adopting dual constitution and keeping people in dark. He said the Akali Dal had declared itself to be a secular party, but it kept contesting elections without making requisite changes in its constitution.

Khera filed a complaint against Badal in 2009 alleging the SAD had submitted two different constitutions to the Gurdwara Election Commisson and the Election Commission of India.

In 2009, Socialist Party leader Balwant Singh Khera filed a complaint against Badal alleging the SAD had submitted different constitutions to the Gurdwara Election Commisson and the Election Commission of India.