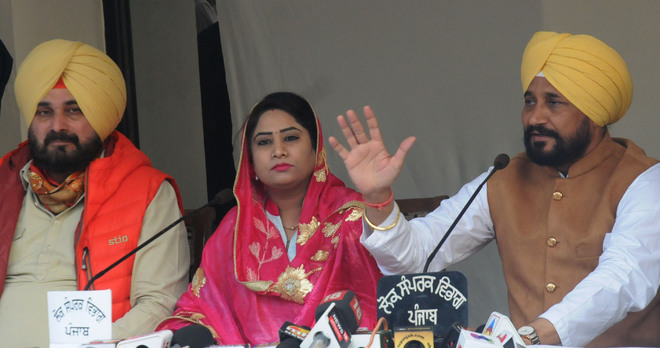 The timing of Ruby’s joining the Congress coincides with the newly-earned truce between CM Channi and the PCC president. Heating up the electoral scene ahead of the polls, the party’s top leadership is in talks for at least four more AAP MLAs from Malwa to join the party. “The Congress is looking for the seats where it does not have a strong candidate”, said a senior leader engaged in the dialogue with opposition party MLAs.

After strategically projecting Chief Minister Channi as the real “aam aadmi”, the joining of Ruby into the Congress punctures the AAP’s narrative of Arvind Kejriwal’s party. CM Channi said more leaders from AAP are expected to join Congress in the coming days.

MLA Rupinder Kaur said she was highly moved by the recent pro-people policies of CM Channi-led government and Arvind Kejriwal-led AAP was exploiting the sentiments of common people. She said AAP MLAs were feeling suffocated as the party was being controlled from Delhi. Indicating growing trouble in AAP over Bhagwant Mann, she claimed she had been demanding that Sangrur MP should be made the CM face, but the party leadership did not have the courage to do so.

Congress sources said the party was on a lookout for strong candidates and its top leadership was in talks with at least four more AAP MLAs from the Malwa region.