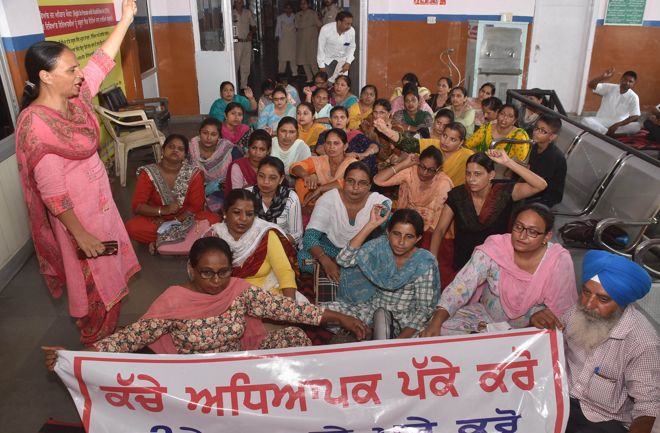 Teachers protest at the DEO office in Bathinda on Wednesday.

Scores of teachers working on a contractual basis today staged protest at the Education Department’s office in Bathinda and demanded regularisation of their services. The teachers also protested in other districts to express their resentment.

The agitating teachers rued that ahead of the 2022 Assembly poll, the Aam Aadmi Party (AAP) had promised to regularise their services and told that the decision in this regard would be taken in the first Cabinet meeting, but nothing has happened so far.

Veerpal Kaur, a contractual teacher, said, “Not just the regularisation of services, the AAP leaders also stated that as long as the policy is not formulated, teachers will get a monthly salary of

Rs 36,000 on the Delhi pattern. It has been almost five months since the AAP came to power in the state, but the government has not taken any concrete steps to regularise our services.”

Daljit Singh, another contractual teacher, said, “If our demands are not met, we will gherao the Chief Minister’s residence in Sunam on July 31. We have submitted a memorandum to the CM. All contractual teachers must be inducted as per the new policy and our services should be regularised. The government must bear our medical expenses as well.”