To widen its reach in Pakistan, SGPC to publish literature in Urdu : The Tribune India 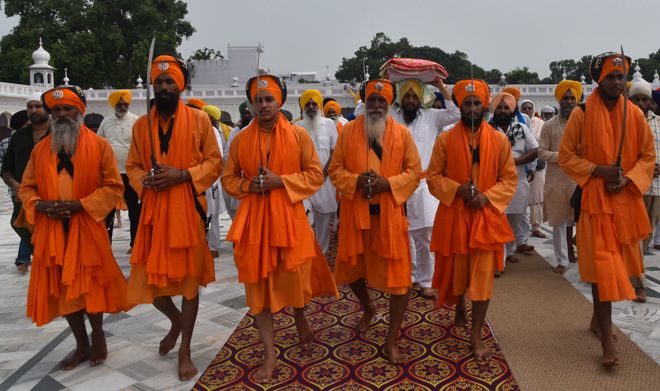 Devotees hold a 'nagar kirtan' at the Golden Temple in Amritsar on Sunday.

As a part of commemoration of the centenary of ‘Guru Ka Bagh Morcha’ and ‘Saka Panja Sahib’, the SGPC has decided to publish information booklets in Urdu, pertaining to the significance of the events.

While the main event of ‘Guru Ka Bagh Morcha’ has been scheduled for August 8 here, the ‘Saka Panja Sahib’ would be commemorated on October 30. Both events were interlinked as part of Gurdwara Reform Movement of 1922.

Booklets on Guru Ka Bagh Morcha and Saka Panja Sahib are being published not only in Punjabi, Hindi, English, but in Urdu as well. These will be distributed for free in Pakistan. — Ajaib Singh Abhyasi, SGPC’s dharam parchar committee member

In a first, the SGPC intends to observe Saka Panja Sahib at historic Gurdwara Panja Sahib in Hasan Abdal, Rawalpindi, Pakistan. A communication has already been forwarded to the Pakistan Sikh Gurdwara Parbandhak Committee (PSGPC) for visa facilitation.

The SGPC would also conduct Gurmat programmes at Gurdwara Panja Sahib by initiating “akhand path” on October 28 and the “bhog” would be performed on October 30.

Abhyasi said the PSGPC had taken up the matter of visa from the Pakistan’s home ministry, initially for a six-member delegation to discuss the programmes. “We are awaiting their response,” he said.

The SGPC has designed a special logo to mark the occasion, besides plans are afoot to introduce special copper coins that will have SGPC’s logo on one side and the image of Gurdwara Panja Sahib on the other side.

Similarly, a special postage stamp and an envelope, too, would be introduced in coordination with the Indian Postal authorities.