Entire family was buried beneath the debris 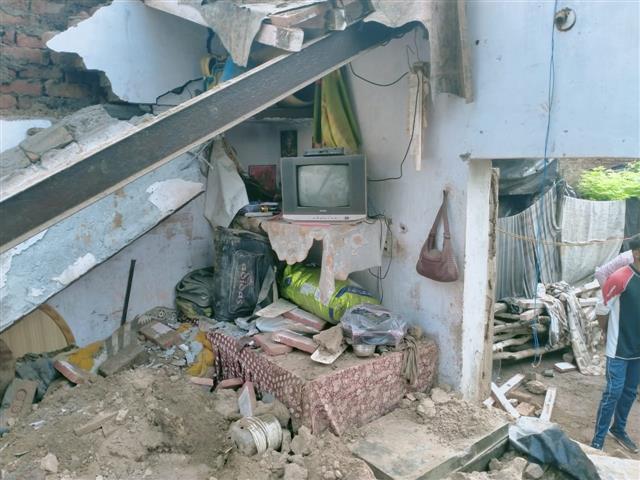 Two children, aged nine and seven, died while five other members of the family were injured when the roof of their house collapsed early Wednesday morning in Patiala district.

The deceased have been identified as 7-year-old girl Tania and 9-year-old boy Sachin.

The children's father, Bittu, his wife, Neelam, and the couple's other three children, Manish, Hans and Kapil, all aged less than 12, were injured and admitted to Government Rajindra hospital here.

Sources in Dudhan Sadhan village said the roof of the kachha house collapsed at about 5 am Wednesday when the family was sleeping. "The area behind their house is not paved and as such, the back wall of the house shifted after yesterday's heavy rainfall," a source said.

They said the entire family was buried beneath the debris and locals, along with police officials, pulled them out of the debris.

Raur Jagir police post in-charge Gurwinder Singh confirmed the two deaths and said the other family members were recuperating at the Government Rajindra Hospital. He said as per the family, the house was strongly built but the roof suddenly collapsed. He said the two children were pronounced dead by doctors at the Rajindra hospital and the bodies were being handed over for post-mortem.

Meanwhile, Dudhan Sadhan Tehsildar Sarabjit Singh Dhaliwal said the government will immediately compensate the family for the loss. "The family will be provided financial help of Rs 95,000 for construction of their house. The postmortem of the dead bodies is being conducted. The government will also provide Rs 4 lakh as compensation for each deceased family member," he said.

Four were killed the previous night:

The incident has taken place a day after a roof that collapsed at village Matoli of Patran here buried and killed four members of a family including three children. The children's mother was injured while two other family members who were in another room escaped.