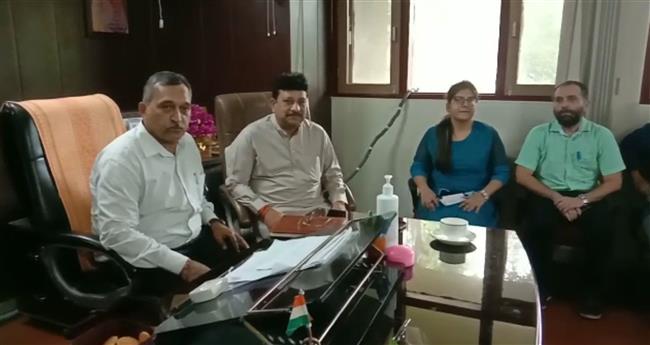 Getting involved in a controversy and then reportedly entering into a compromise seems to have become a common practice for Aam Aadmi Party’s (AAP) Jalandhar MLAs Sheetal Angural and Raman Arora.

On several occasions, the duo had allegedly first maltreated government officials and then struck a compromise with various factions after being pulled up by their political bosses.

Recently, MLA Arora and his men reportedly manhandled DCP Naresh Dogra (now transferred) over a petty fight between two shopkeepers. The MLA struck a compromise with the senior cop last evening. Showing solidarity with Dogra, members of the Police Family Welfare Association held a demonstration in the city.

I represent two lakh voters. The DCP let me down by abusing me. The reaction of my supporters against him was obvious... Today, I went to the Civil Hospital and met the doctors. There was no reason for me to apologise as it wasn’t my mistake. Raman Arora, Jalandhar central MLA

I only stand for the truth and try to become a voice of the oppressed. In the process, I have to take a stand sometimes. — Sheetal Angural, Jalandhar west MLA

In a related incident, doctors at the Civil Hospital today lodged a protest over inaction against MLA Sheetal Angural’s brother Rajan Angural and his supporters after they tried to pressurise the doctor to issue a medico-legal report as per their wish and smashed the glass door of the operation theatre.

On MLA Angural’s behalf, MLA Arora went to the Civil Hospital and tried to pacify the upset doctors. Division No.4 SHO Mukesh Kumar said the doctors had agreed to take back their police complaint.

On August 26, MLA Angural had accused a city-based doctor of negligence following death of a young woman of his constituency after delivery. The MLA first released a video against the doctor and as the Indian Medical Association came in support of the medico concerned, the MLA backtracked and released a picture of him hugging the said doctor.

On July 22, MLA Angural had gone live on Facebook and accused ADC Major Amit Sareen, a superintendent and staff of the Deputy Commissioner’s office of corruption.

Just as the PCS Officers’ Association and employees of the DC office announced to go on strike, he released an apology video.

Both MLAs were also among the complainants in the ‘Operation Lotus’ controversy.