Try to break barricades | Police push them back 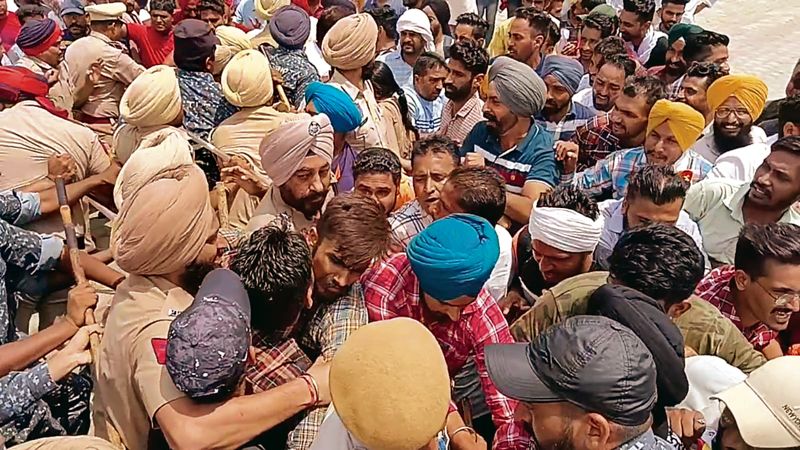 Cops and protesters push each other near the CM’s house in Sangrur.

Unemployed teachers tried to break through the police barricades put up near the local residence of Chief Minister Bhagwant Mann here today. The police, however, foiled their repeated attempts, leading to arguments between the two sides.

One of the protesters, Balwinder Singh, said: “In December 2021, then Congress government had announced that it would recruit 5,994 ETT and TET teachers. To date, the state government has not started the process. Besides, we demand that reservation for candidates from other states must be quashed. Priority should be given to Punjab candidates.”

Ranbir Singh Nadampur, district president of the Overage Teachers Union, said he and others had cleared the Teacher Eligibility Test (TET) in 2017. “The previous government did not start the recruitment process. Now, we no longer meet the age criteria. The government must give relaxation in age so that we can also apply for jobs,” he said.

A member of the Adarsh School Teachers Union said, “All protesters assembled near the CM’s residence in the morning, but no official came to meet us. The education sectors holds importance and the government must not ignore it. The AAP government should at least listen to our grievances once.”

The four unions later ended the protest after a meeting with the authorities was fixed for July 22.