Amid war of words between Punjab governor and CM, govt says issues like GST, stubble burning to be taken up during Vidhan Sabha session : The Tribune India

Amid the war of words between Punjab Governor Banwarilal Purohit and Chief Minister Bhagwant Mann, the state government, in its latest communication, on Saturday said issues like GST, stubble burning and power scenario will be taken up during the proposed Vidhan Sabha session.

The Punjab government seems to have gone soft on the issue even as the Governor on Saturday wrote to the chief minister. 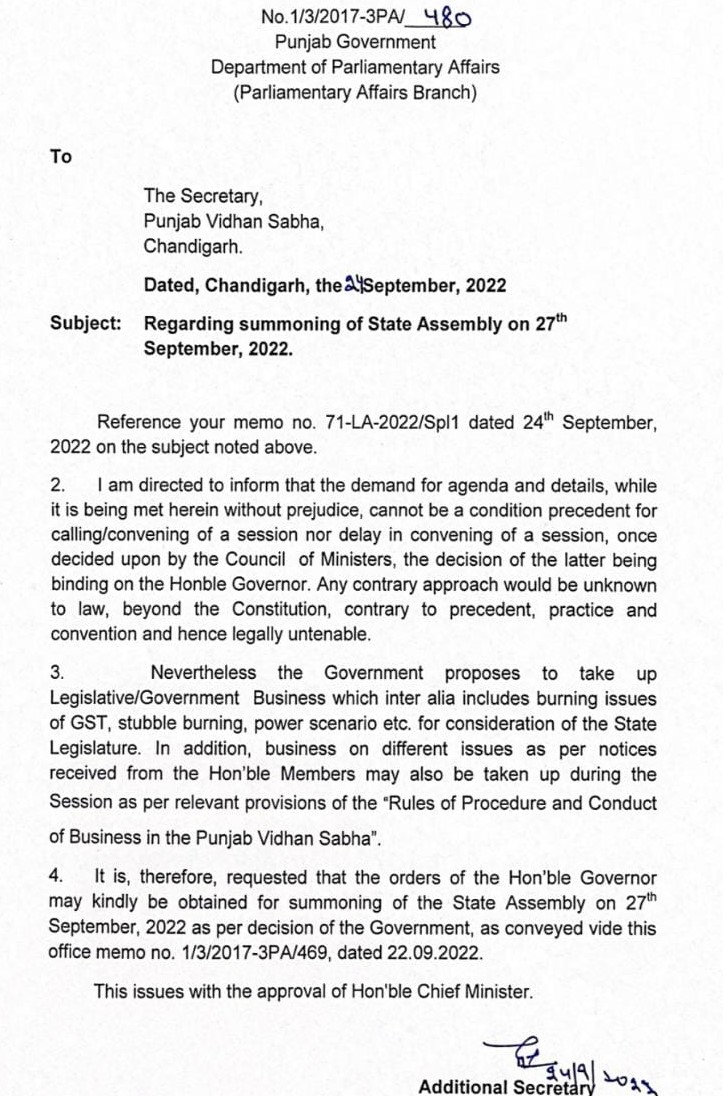 The governor on Friday had asked the Punjab Vidhan Sabha Secretary to give details of the legislative business to be taken up in the Assembly session on September 27.

Reacting to this, Mann had said in a tweet, “Governor/President consent before any session of Legislature is a formality. In 75 years, no President/Governor ever asked list of Legislative business before calling session. Legislative business is decided by BAC (Business Advisory Council) and speaker. Next Governor will ask for all speeches also to be approved by him. Its too much.”

According to a press release on Saturday, responding to this, the Governor wrote to the CM Punjab:

“After reading your statements in today’s newspapers, it appears to me that perhaps you are ‘too much’ angry with me. I think your legal advisors are not briefing you adequately. Perhaps your opinion about me will definitely change after reading the provisions of Article 167 and 168 of the Constitution, which I’m quoting for your ready reference:

(a) To communicate to the Governor of the State all decisions of the council of Ministers relating to the administration of the affairs of the State and proposals for legislation;

(b) To furnish such information relating to the administration of the affairs of the State and proposals for legislation as the Governor may call for; and

(c) If the Governor so requires, to submit for the consideration of the council of Ministers any matter on which a decision has been taken by a Minister but which has not been considered by the council."