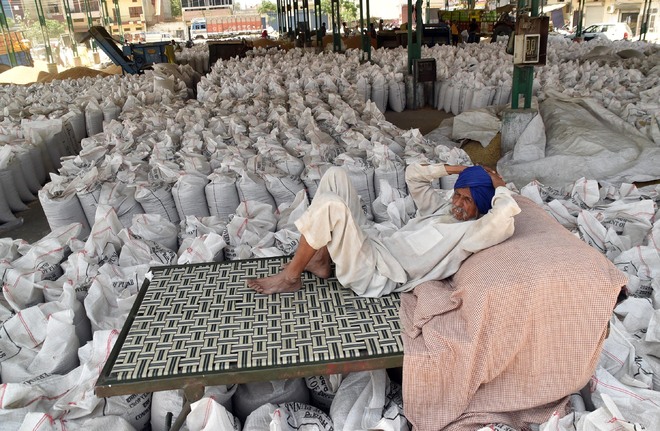 A farmer waits for procurement of his crop at the Bathinda grain market.

Amid predictions of an increase in wheat production across country, the initial estimates of Crop Cutting Experiments (CCE) of the Punjab Agriculture Department point towards a decline. Farmers have been demanding financial aid from the government for their losses.

As per sources, the department will conduct 2,350 CCEs across the state, but to date its officers have completed only 262 CCEs.

During CCEs, officers have found that per hectare wheat production has seen a dip from average 50.04 quintal per hectare of last year to average of 49.37 quintal this year in various districts.

Though the exact decrease and its reasons can be ascertained only after the end of purchase season and completion of all CCEs, the 67 kg per hectare decline is a wakeup call for many farmers demanding help from the government for diversification.

“The vagaries of weather have led to the decline. The government should provide financial aid and proper market for other crops to promote diversification,” said Harwinder Singh, a progressive farmer from Bhadalwad village of the district.

Some senior agriculture officers said smuggled wheat did not have any link with per hectare estimates of production of the state as they measure the production from their CCEs.

“During the 262 CCEs, we have seen an average decline of 67 kg per hectare. It’s the initial trend and anything final can only be said after the end of CCEs and purchase season,” said Gurwinder Singh, Joint Director, Punjab Agriculture Extension.