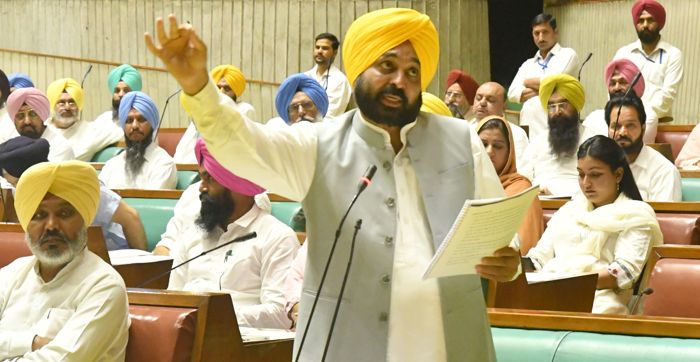 Reiterating the commitment of his government to eliminate gangster culture from Punjab, Chief Minister Bhagwant Mann today announced comprehensive reforms in laws that restore the citizens’ faith in the legal system and help maintain law and order.

Winding up the discussion on the Governor’s address in the Vidhan Sabha, Mann said the state government would soon introduce the witness protection Bill and convert all jails of the state into high-security prisons, where a strict vigil would be kept on inmates.

Over 14K teachers being recruited

He said the state government had already set up an anti-gangster task force which was working in coordination with the district police, Intelligence wing, BSF, NCB and other agencies to keep a check on the cross-border smuggling of narcotics and weapons.

Earlier, just as the Chief Minister got up to address the House, he was interrupted by the Congress MLAs, who wanted time to speak on the Governor’s address. They were, however, told by Speaker Kultar Singh Sandhwan that the time allotted to their party was utilised by the MLAs yesterday. Refusing to budge, the MLAs led by Leader of Opposition Partap Singh Bajwa gathered in the Well of the House. When the Speaker did not relent, the MLAs staged a walkout.

The Chief Minister continued his speech uninterrupted thereon, highlighting the achievements of his government. Announcing a war against drugs, he categorically said the police had been directed not to spare anyone conniving with the drug mafia. He said senior police officers had been asked to work in close coordination with the STF to catch the big fish involved in the supply of drugs. He stressed every police officer would be held accountable in dealing with the drug menace. Mann said the number of OOAT clinics had been increased from 280 to 500 to ensure ease of accessibility of treatment for the drug addicts.

He said his government would introduce ‘one pension’ Bill for MLAs in the ongoing session. The Chief Minister said the corruption-free governance was at the core of the ethos of the state government and in just a short period of time, 29 cases had been registered and 47 arrests made with the launch of the anti-corruption helpline.

He announced the government schools would be transformed into ‘Schools of Eminence’. “We have made efforts to regulate the fee of private schools by not allowing them to enhance it arbitrarily this academic year. The NOC of schools found violating the Fee Act, 2016, will be cancelled and a fine of Rs 1 lakh will be imposed on them,” he said.

As regards healthcare, he said mohalla clinics in urban areas and pind clinics in rural areas were being introduced.