Will not withdraw from fight against farm laws, Priyanka tells Punjab Congress MPs : The Tribune India

Will not withdraw from fight against farm laws, Priyanka tells Punjab Congress MPs

A section of Congress MPs and lawmakers from Punjab have been sitting at dharna at Jantar Mantar seeking repeal of farm laws. 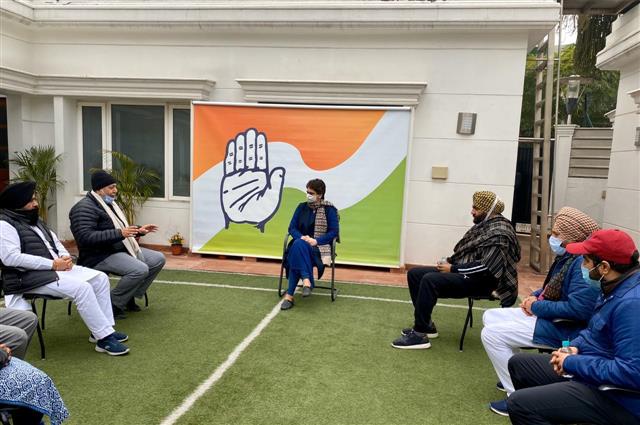 Congress MPs from Punjab, who have been protesting at Jantar Mantar for over a month seeking repeal of farm laws, met AICC general secretary Priyanka Gandhi Vadra on Friday.

The MPs, including Ravneet Bittu, Gurjit Singh Aujla, Jasbir Singh Gill and MLAs Kulbir Singh Zira and Raminder Singh Awla, were part of the meeting and discussed the party’s political strategy on the issue.

A section of Congress MPs and lawmakers from Punjab have been sitting at dharna at Jantar Mantar seeking repeal of farm laws.

Congress President Sonia Gandhi had sought the repeal of laws in her message on Thursday, ahead of Centre-farmer talks today.

Also read: Eighth round of talks today; govt may leave it to states to implement new laws

Priyanka Vadra told the MPs that there is no other way out of the resolution of the matter except the repeal of farm laws.

“We will continue to stand by the farmers and sit in dharna in protest till the farmers’ demands are met,” Bittu said.

Priyanka also said the party would stand with the farmers till the very end.

“We have always stood by the farmers and will continue to do so,” she said to MPs and MLAs from Punjab.