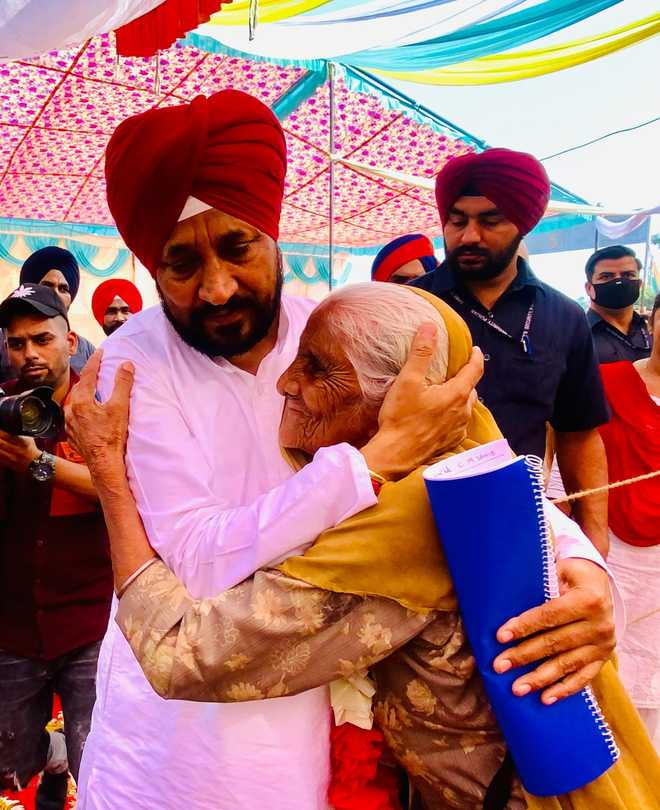 Punjab CM Charanjit Channi during a visit to distribute grants at a village near Morinda on Tuesday.

As Chief Minister Charanjit Singh Channi completes one month in office on Wednesday, his decisions have already burdened the state exchequer by Rs 3,000 crore.

At a time when the state is stretched to its limits because of the financial crunch, this largesse, given with an eye on the upcoming Assembly polls, will further add to the state’s burgeoning debt burden.

Other than waiving the pending water user charges of domestic urban and rural consumers yesterday, the CM had earlier waived the pending electricity bills of consumers having less than 2KW load. While the decision to waive water charges will cost the state Rs 1,800 crore this year (and Rs 500 crore per annum from next fiscal), the decision to waive the power bills, which the CM inaugurated by burning the bills, will cost the state Rs 1,200 crore.

A look at the fiscal indicators for Punjab reveals that the state’s revenue deficit in first five months of the fiscal — from April to August — has already reached Rs 5,028.20 crore. Since the two above mentioned sops have been announced thereafter, the deficit will increase by another Rs 3,000 crore, thus surpassing the targeted deficit of Rs 8,623.30 crore.

Financially, the only saving grace for the government, though it is at the cost of the common man, is the increase in prices of retail fuel and the release of 15th Finance Commission grants, especially as no other efforts have been made to increase the revenue.

The populist moves, which economists refer to as competitive populism or oligopoly, is going to be harmful for the state in the long run and increase the state’s debt burden, which is expected to be Rs 2.82 lakh crore by March 2022.

“The debt servicing alone takes 30 per cent of the state’s revenues. We can’t blame any one political party for this mess, as each party is announcing similar sops ahead of elections, while the one in power has started granting the sops. This fiscally irresponsible behaviour by all parties has to stop,” says economist Sucha Singh Gill.

RS Ghuman, another economist, too, says it is enough of populism and political parties should now try to go for development and growth. “The competitive political populism will hit the state hard. Knowingly or unknowingly, purchasing votes through populist measures is not in the long-term interest of the state. It will have adverse effect on public sector utilities and institutions and will incapacitate the people, who will then become permanently dependent on freebies,” he added.